Over the course of the First World War, the British Indian army sent more than 140,000 men to the Western Front – 90,000 serving in the infantry and cavalry and as many as 50,000 non-combatant labourers.

The British Indian soldiers went on to fight in some of the bloodiest battles of the first year of the war. 20% of the British Indian army were Sikhs, despite being less than 2% of the Indian population. 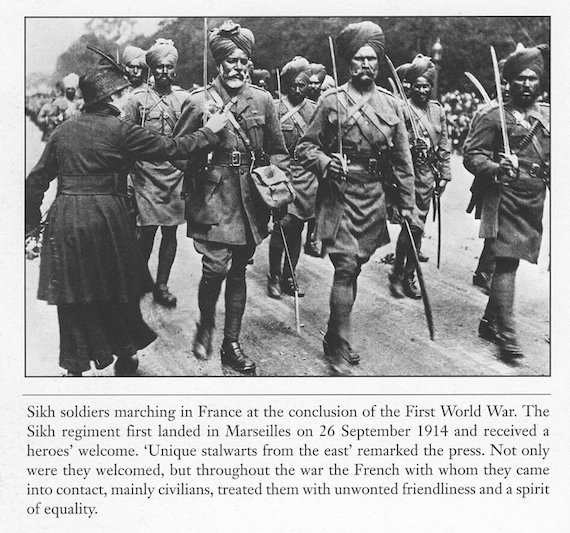 The Sikhs came forward and helped the Europeans at a time of crisis in World War I and II and gave their lives in their thousands. Sikhs fought for the Allies in all seven regions of battles across the world, including Europe, Africa, Gallipoli and the Middle East. Over 83,000 turban wearing Sikhs were killed and over 109,000 were injured serving in both World Wars.

Sir Winston Churchill commenting on the Sikh sacrifices said: “British people are highly indebted and obliged to Sikhs for a long time. I know that within this century we needed their help twice and they did help us very well. As a result of their timely help, we are today able to live with honour, dignity and independence. In the war, they fought and died for us…”

On Saturday 10 November the 100 strong UK Sikh delegation will set off for the impressive Neuvre-Chapelle Memorial in France. This commemorates more than 4,700 British Indian army soldiers who lost their lives on the Western Front during the First World War and have no known grave.

It was at Neuve Chapelle that British Indian soldiers fought their first major action as a single unit in March 1915. From 10–13 March 1915, Indian soldiers made up half of the attacking force and despite suffering very heavy casualties succeeded in capturing important sections of the German line.

The delegation will then travel to Ypres in Belgium and take part in the last post ceremony at the Menin Gate Memorial at 8pm. Having seen some of the heaviest fighting in the First World War, Ypres was in ruins. The Menin Gate, bears the names of more than 54,000 soldiers who died before 16 August 1917 and have no known grave.

Between October 1914 and September 1918 hundreds of thousands of servicemen of the British Empire marched through the town of Ypres’s Menin Gate on their way to the battlefields.

Building of the memorial began in 1923 and it was unveiled on 24 July 1927. The memorial now stands as a reminder of those who died who have no known grave and is perhaps one of the most well-known war memorials in the world.

Soon after its completion the memorial became an important place of pilgrimage for visitors to the battlefields. Every evening since 1928, at 8pm buglers sound the Last Post.

The ceremony has become part of the daily life of Ypres and traffic is stopped from passing through the memorial. Only during the German occupation of the Second World War was the ceremony interrupted.

Every year on the November 11 (Armistice Day), hundreds of Sikhs come from across Europe to Ypres to take part in the Poppy parade and pay their respects at Menin Gate. This year on the 100th anniversary the numbers are expected to be much higher and Sikhs will also be putting on a Gatka demonstration.

Following the last post ceremony at 11am that will attract the worlds media hundreds of Sikhs from across Europe will gather at Hollebeke Memorial where a small monument was built by the Belgium Government in 1999. It was inaugurated by the ‘Panj Piare’ in memory of Sikh soldiers who fought for the first time against Germans in October 1914. After an Ardaas ceremony Langar will be served to all present.

Bhai Amrik Singh, the Chair of the Sikh Federation (UK) is leading the UK delegation and has been chosen by Sikhs from across Europe to lay the wreath at Menin Gate on 11 November on behalf of the Sikhs. He said:

“The Sikh teachings profess it as a duty and great honour to face and fight oppression and tyranny where ever it exists. It is quoted in the Sikh National Anthem:

“May I never be afraid to die on the battlefield fighting against the oppression and injustice….May I never refrain from performing righteous deeds.”