150 Member Committee List was Not Final and it was Mistakenly sent to the Media: says SAD (Mann)

Chandigarh: A day after the Shiromani Akali Dal (Amritsar) released a list of 150 persons as the ‘co-ordination committee to conduct the November 10, 2016 Panthic gathering at Talwandi Sabo, the party headed by S. Simranjit Singh Mann said that the list was “not final” and it was “mistakenly released” to the press.

Notably, a list was released yesterday from the office of Shiromani Akali Dal (Amritsar) along with a written press release which stated that the list was finalised by acting jatehdars during a meeting of SAD (A) and Untied Akali Dal. (read full list and more details here). 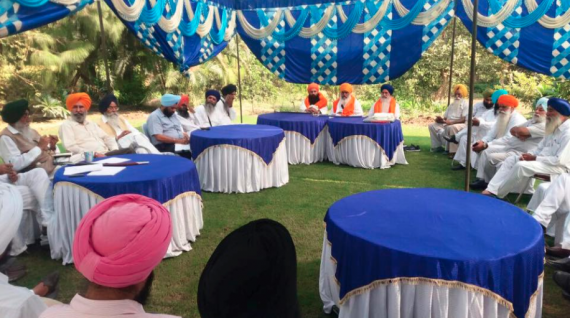 A view of meeting of SAD (Mann), UAD and acting jathedars [File Photo]

In a written statement issued today, SAD (Amritsar)’s chief spokesperson and political & media advisor Iqbal Singh Tiwana said: that the list was merely a tentative or proposed list which was yet to be finalised by the acting jathedars.