Anandpur Sahib: Digging being done around one of the oldest gurdwaras of Anandpur Sahib to expand it before the town’s 350th foundation year celebrations has unearthed a centuries-old well, which is claimed as one of the four wells dug up by ninth Sikh Guru, Guru Teg Bahadur. The structure of the well is similar to the two other wells discovered around the gurdwara which were constructed by the Guru after he founded the town in 1665.

The 85-foot deep well is made up of medieval period thin “Nanakshahi” bricks, which are joined together with lime. Claim holds weight since the well has been unearthed just 10m away from Gurdwara Bhora Sahib — also popular as Gurdwara Guru Ka Mahal — where the ninth Sikh Guru stayed from 1665 till his martyrdom in 1675. Two other important small gurdwaras are located just few metres away from the recently-discovered well. Gurdwara Tharha Sahib is built over the place where the ninth guru had the historic meeting with Kashmiri pandits. Behind it is Gurdwara Damdama Sahib, the place where Guru Gobind Singh (then Gobind Rai), was installed as the 10th Sikh Guru after martyrdom of Guru Tegh Bahadur. 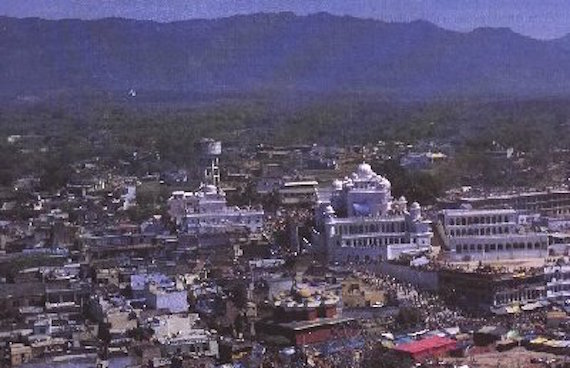 “Three important happenings of the period had occurred in this complex, which means it is the place where Guru’s family lived. Therefore, requirement of wells was obvious. Oral historical record suggests that the ninth guru, while laying foundation of Anandpur Sahib, had dug four wells around this place. Latest well, which we have discovered incidentally, is the third such well. It is said the fourth one is located beneath the platform of gurdwara parkarma (circumambulation),” said Baba Avtar Singh, who is supervising the renovation of the gurdwara.

Sukhwinder Singh Grewal, manager of Gurdwara Takht Sri Kesgarh Sahib, also claimed that the well was one of the four dug up by Guru Tegh Bahadur. All these structures are located in area of about 1.5 acres.

“After Guru Gobind Singh left this place, Mughal forces had reduced the complex to rubble. Subsequent construction of houses in all these centuries further obscured such structures. Until a year ago, a house was located over the place where this well was discovered. Although upper portion of the well was discovered at fag end of the last year, the well has been cleared only recently,” he added.

The fourth well is yet to be discovered. The third well is located around 25m away from the newly-discovered well in south-east direction. The upper portion of well is visible. “We were planning to clear this well as well. But it is located on private land and its owner has refused to part with his property,” he added.