New Delhi: It was Mulayam Singh Yadav led Samajwadi Party’s government in Uttar Pradesh in 1994 when 28 Sikh detainees were brutally beaten up by jail staff- off which seven had died and remaining 21 suffered serious injuries. A complaint was field by Giani Tarlok Singh, a local leader of the Samajwadi Party and chargesheet was field against 42 jail staff including the then jail superintendent Vidhyanchal Singh Yadav. The case was later withdrawn in 2007 by Mulayam Singh Yadav led Samajwadi Party’s government. No one was held accountable in this case. 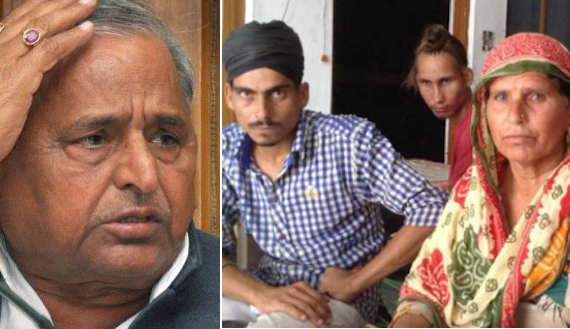 [File Photos used for representational purpose only] Mulayam Yadav (L) – Sukhwant Kaur, whose brothers-in-law were among 28 beaten up in jail, with family (R)

Now when the issue is again highlighted by the media, The Tribune newspaper in particular, it’s Samajvadi Party’s government in UP. Mulayam Singh Yadav yesterday assured the Lok Sabha to order a probe into the incident.

The issue was raised by SAD (Badal) MP Prem Singh Chandumajra in the Lok Sabha. Chandumajra was carrying a copy of The Tribune which yesterday exposed one the most horrific episodes denial of justice to Sikh victims in India.

“Action is being taken”, was the response of Mulayam Yadav after Chandumajra raised the matter in the Lok Sabha during Zero Hour on May 09 seeking a CBI probe into the matter.

ALSO READ to know More about this case: