Names of Sadhvi Pragya, Lokesh Sharma, Shiv Narayan Kalsangra, Shyam Bhavarlal Sahu and Praveen Takkalki were dropped from the case as the NIA gave clean chits to these persons while moving the chargesheet before a Special Court in this case.

Moreover, stringent charges under MCOCA have been dropped against all accused, citing “insufficient evidence”.

As per media reports another accused Lt Col Prasad Shrikant Purohit has been charged under the anti-terror law UAPA and other provisions of IPC. 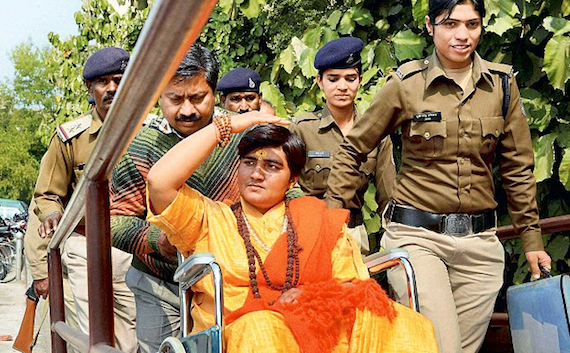 “The dropping of charges against Pragya sets the stage for her early release from jail. Last month, the NIA said the investigation failed to find substantial evidence that establishes Pragya’s involvement in the blast.
The Congress alleged that accused are being let off lightly because of their links with the central government”, notes the Times of India (TOI).

Congress leader Digvijaya Singh said, “The central government wanted to save Malegaon (blast case) accused as they have connections with them.”

NIA had listed 14 people, including Lt Col Prasad Shrikant Purohit, as an accused in the blasts in Malegaon town in Nashik district on September 29, 2008. Seven people were killed when two bombs planted on a motorcycle exploded.

The probe was initially conducted by the Maharashtra Anti-Terrorism Squad and later handed over to the NIA.

Ramchandra Kalsangra and Sandeep Dange, who are accused in the 2007 Samjhauta train blast as well, were named absconders.

The Malegaon 2008 blasts changed the course of many probes, including the Samjhauta Express blast case in which 68 people were killed. For the first time, the role of a Hindu right wing group had come to light in a terror attack. The case was investigated initially by Joint Commissioner of Mumbai ATS Hemant Karkare, who was killed during the 26/11 Mumbai attacks.