New York, NY (August 15, 2014): Two years ago, on August 5, 2012, a gunman with Neo-Nazi ties entered the Oak Creek Gurdwara in Wisconsin and killed six innocent worshipers, injured several others, and before killing himself. It is considered to be one of the most lethal attacks on a house of worship in America since the 1963 bombing of the 16th Street Baptist Church in Birmingham, AL.

Recently Sikhs observed second anniversary of the tragedy and remembered Paramjit Kaur Saini, Sita Singh, Ranjit Singh, Prakash Singh, Suvegh Singh Khattra, and Satwant Singh Kaleka who were got killed. Baba Punjab Singh who was seriously injured, is yet to recover fully. Sikhs in America have responded to this tragedy with open hearts and heads held high, consistent with the Sikh belief in Chardi Kala (eternal optimism). 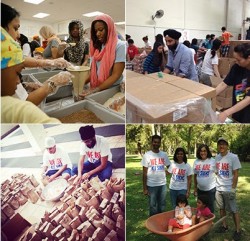 Photos of National Day of Sewa observed by the Sikh Coalition

“As we remember the Oak Creek tragedy, the Sikh Coalition looks forward to building on the progress that we have made in advancing the civil rights of Sikh Americans. Members of the U.S. Congress have introduced a resolution in remembrance of the Oak Creek tragedy. This resolution reminds us all to remain vigilant against bigotry and violence” reads a statement by the Sikh Coalition.

“The Sikh spirit of ‘Chardi Kala’ or eternal optimism counsels us to keep our heads up even in the face of tragedy,” said Sapreet Kaur, Executive Director of the Sikh Coalition.

“So even if the Sikh turban and beard may be viewed with hate by some, we press on with optimism until it is viewed with the compassion and love that they truly represent. Even still, two years after the mass shooting in Oak Creek, WI, we continue to look to the Oak Creek community for inspiration”, she added.

While there have been some important policy developments since Oak Creek, the need for awareness, tolerance, and community still exists.

As always, the Sikh Coalition has issued encouragement to all Sikhs to practice their faith fearlessly.