New Delhi, India (August 23, 2014): Much awaited Punjabi movie “Kaum De Heere” was again banned by Indian government on August 21, just a day before it’s released in India. The movie was previously banned by Central Board of Film Certification (CBFC) on January 28, 2014. The initial date of release of the movie was February 28. But after the Indian authorities decided against the movie, it was released outside India on March 14.

Kaum De Heere is based on lives and sacrifice of Sikh martyrs who had assassinated Indian prime minister Indira Gandhi on October 31, 1984. 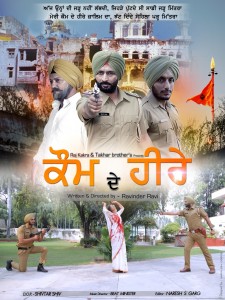 The Moive was then cleared by CBFC in July 2014 after the makers of the movie made some changes in it. Then a fresh date of release was announced as August 22. But India’s Ministry of Home Affairs, Information & Broadcasting Ministry and Central Board of Film Certification jointed decided to ban the movie in a last hour decision on August 21 taking a plea that the screening of the moive may lead to violence and enmity between communities.

Satish Katyal, producer of the movie, has said that if did not get permission to release his film in the next few days, he will knock on the doors of the court.

Reacting to the stalling of the film’s release by the Ministry of Information and Broadcasting, Satish Katyal said the decision appeared to have been taken under political pressure.

He said that since the certificate issued by the Central Board of Film Certification had only been withdrawn and the film not banned, he would first re-apply to the Board, and approach the courts if his request was turned down.

Meanwhile, India’s move to stall the movie has invited sever criticism. Sikh body, Dal Khalsa, has described the government’s decision as the “first onslaught of the Modi government on Sikh sentiments.”

In a statement, Dal Khalsa has urged the Ministry of Home Affairs to withdraw the ban because the film was based on historical facts which could not be changed.