Biggest irony: Murderer of Sikhs is vice-president of “Sikh party” 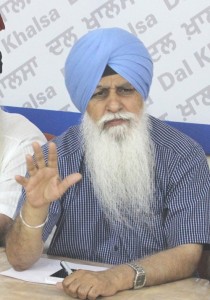 It was very unfortunate that the people whose hands are drenched with the blood of innocent Sikhs are being accommodated in the party that claims to be representing the aspirations of Panth.

“This is a biggest irony. The person who has killed thousands of innocent Sikhs or left hundreds physically impaired through its renegade brigade commonly known as “Alam Sena” is vice-president of the Akali Dal”.

He said they would expose all those perpetrators of violence, most of whom have joined mainstream parties like Akali Dal, Congress and BJP.

Party spokesperson Kanwar Pal Singh asserted that since the SAD’s Panthic mask is off, it was high time for Sukhbir Singh Badal to also induct the infamous cop KPS Gill in the party hierarchy, who’s so-called contribution to suppress the Sikh struggle has been lauded by its alliance partner BJP not once but many times.