Amritsar, Punjab: Realizing that excellence and activism is need of the hour, the young activist’s boys and girls gathered at a call of Sikh Youth of Punjab (SYP) today resolved that they would address the issues of drug menace, disrespect to women and yellow literature with persuasion, education and arming residents of Punjab with the knowledge.

They declared not to allow Punjab to be consumed by drugs and asserted that personal responsibility was a pre-requisite to tackle this bull by the horn.

As a united voice with actionable agenda we, the tomorrow of Punjab, will bring change in the little world we live in, reads the resolution adopted during the youth conference organized by SYP on the outskirts of Guru Nanak Dev University. 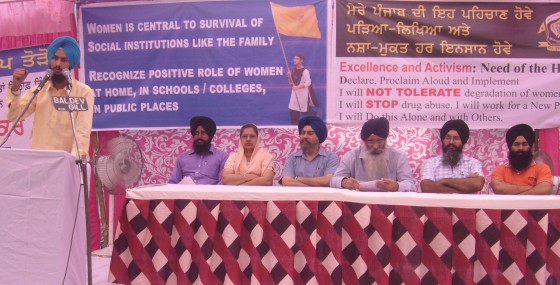 Youth activist Sukhvinder Singh addressing the conference. Seen in the pic are Kiranjot Kaur and others

The speakers mainly SGPC members Bibi Kiranjot Kaur, Prof Jagmohan Singh and Prof Inderjit Singh Gogoani felt that the society was facing attack from the dirty nexus of politicians-police-smugglers who work under cloak of various socio-cultural fronts. They pointed out that Punjab was under attack from these drug lords who are being facilitated by political leaders across the spectrum.

The speakers urged the youth to do activism by declaring and proclaiming that they would not tolerate degradation of women and that they would bail Punjab out of sinking hole.

Banners were displayed prompting the youth to work for a New Punjab, a drug free state and make the next generation proud of Punjab.

SYP head Nobeljit Singh from Hoshiarpur said we have no doubt that the strong value system of Punjab, respect for women, standing up for the underdog (oppressed) and refraining from intoxicants will withstand the test of our time.

Delivering the key note, party’s vice head Paramjit Singh Tanda observed that confronting any socio-political issue that was being patronized by the established conservative class was never an easy task. What we need today is not standing observation or nodding of heads to address the issue but a commitment with ourselves that yes we can and will change the current system that is flawed.

Organization’s secretary Sukhvider Singh from Anandpur Sahib said drugs do not discriminate among Punjabi’s. The cancerous epidemic affects all alike, he said and added that modernity at the expense of vulgarity, diluting our values is never welcome and will be rejected by the entrepreneurial spirit of the Punjab.

Kiranjot Kaur said women consist almost half the human population and have to be included in leadership positions for promoting better understanding in the society. She further said a woman was the core of a family which is smallest unit of society, therefore her contribution was immense in inculcating moral values and spirit in the young.

Well known human rights activist Prof Jagmohan Singh in his address said Punjab today was going through difficult times. Drug abuse was a serious concern. Lack of interest in education has taken gigantic proportions. A neo-sub-culture a la Bollywood is being foisted on us through the mega-rich Pollywood producers who are not Punjabi, the degrading treatment to women in all walks of life puts a question mark on Punjabi character, the lethargy and lack of foresight of the governmental authorities was leading us nowhere.

He said from streets to the corridors of power, from canteens to the drawing rooms, this country runs on two hypothes –“chalta hai “ and “mainu ki” There is filth on the streets –chalta hai, there is goondaism in the colony –mainu ki, the government is not fulfilling its promises –so what can I do, girl students are being teased outside colleges and universities –it is their problem, not mine, the neighbour’s son has become a drug addict –too bad but that family is responsible. These are our standard responses. Everyone’s problems are nobody’s problems.