Srinagar, Kashmir: The Jammu and Kashmir high court on Monday sought response of the Centre and the state government on a petition seeking a probe into the killing of 35 Sikhs in Chattisinghpora area in March 2000.

A division bench of the high court comprising justices Mohammad Yaqoob Mir and MH Attar issued notices to respondents including the Centre and the state government to reply to the petition within two weeks.

The Public Interest Litigation (PIL) has been filed by one Sardar Avtar Singh Sodhi, a resident of Mehjoor Nagar area here. 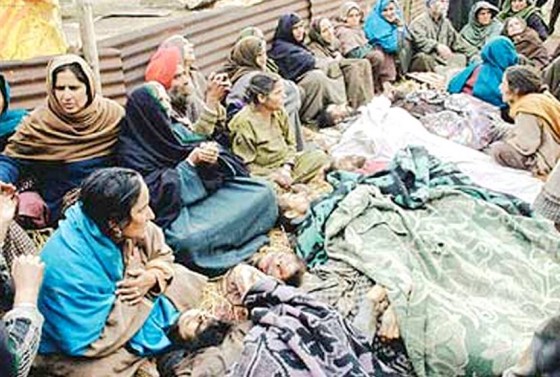 The other major relief sought by the petitioner is reservation for Sikhs of J&K in all state departments and all other state institutions including the legislature, judiciary and executive.

He has also sought setting up of the Punjabi language department in the University of Kashmir and financial assistance to deserving students from the community for higher studies abroad.

It is notable that 35 Sikhs were massacred by persons in Indian Army uniforms at Chttisinghpora village of Anantnag district on March 20, 2000 — a day before then US President Bill Clinton was to arrive on his maiden visit to India.

In the evening of March 20, 2000, on the eve of then US President Bill Clinton’s visit to India, gunmen reportedly dressed in army fatigues entered Chatisinghpora, a predominantly Sikh village in South Kashmir’s Islamabad district.

They ordered all the Sikh men and boys to assemble at the village Gurdwara, shot and killed 36 of them. On March 25, Army shot dead five men in Pathribal village in the same district and claimed they were foreign militants responsible for killing the Sikhs.

The Army version was supported by police who termed it a joint operation. It later turned out that all those killed in Pathribal were local residents reportedly picked up by Army, police and government gunmen from various areas.