Maharashtra, India: An apparent case of caste violence three members of the Jadhav family who belonged to a Dalit caste were brutally murdered in Pathardi town of Maharashtra’s Ahmednagar districts. The killings reportedly took place on Tuesday (October 21).

The police says they are investigating the case. However, the culprits are still at large.

The incident took place in the Jadhavwadi in Javkhade Khalsa village of Pathardi town. The bodies of the couple – Sanjay Jadhav (42) and Jayashree (38) and their son Sunil (19) were found with body parts chopped in pieces in the nearby well.

The incident came to light when farm workers saw the door of the house open and informed the victims relatives. 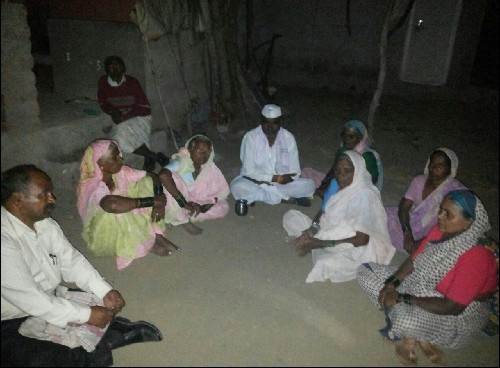 Relatives of victim family in grief

Later, when the villagers launched the search operation, the body was found chopped in pieces in an empty well, which was 500 feet away from their house.

The angry villagers, informed the police, but refused to allow Panchanama of the body until senior officer reached the spot.

Sanjay Jadhav, a farmer by profession owned an acre of land. Whereas, his son Sunil, who works in a milk dairy in Mumbai had come to his village a week ago.

Relatives strongly suspect the incident to be a case of ‘honour killing’. “Rumours of an illicit affair between a married lady in an upper-caste household, who lived adjacent to the Jadhav’s farm, and a member in the Jadhav family, had been festering for more than a year. This may have led to such a savage retribution,” said a relative of the family.

At the time of the crime, Mr. Jadhav, a mason by profession, was staying in his makeshift home on his acre-and-a-half farm plot with his wife and his son. Sunil, pursuing his Diploma in Dairy Science from Goregaon in Mumbai, had come over for Diwali holidays.

An ominous silence has descended on the village and the Dalit hamlet of Jadhavwadi in the aftermath of the triple murder, with tight police security in place for the funeral. The Pathardi police said they had dispatched teams to several places to locate the murderers.

The incident has drawn sharp condemnations from the Dalit community. “There were no previous incidents of caste tension in Pathardi earlier. The sheer ferocity of the murders has profoundly disturbed the sentiments of the community,” said Sunil Salve, a local Dalit activist.