New Delhi/ Amritsar: Narendra Modi led BJP government has declared to hold Gurdwara elections for Shiromani Gurdwara Prabhdandk Committee (SGPC) in September 2016. Last elections of SGPC were held in 2011 but no notification was issued to give effect to the 2011 elections. Moreover the validity of 2011 elections is under scanning of Supreme Court of India.

According to information available with the Sikh Siyasat News (SSN), the government of India has already formed a committee to appoint Chief of Gurdwara Election Commission (CGEC). The committee is headed by Indian Prime Minister Narendra Modi. India’s Home Minister Rajnath Singh is also a member of this committee that has reportedly started to process for the appointment of Chief of Gurdwara Election Commission.

It is further learnt that India’s Ministry of Home Affairs (MHA) has formed new rules for the appointment of Chief of Gurdwar Election Commission. 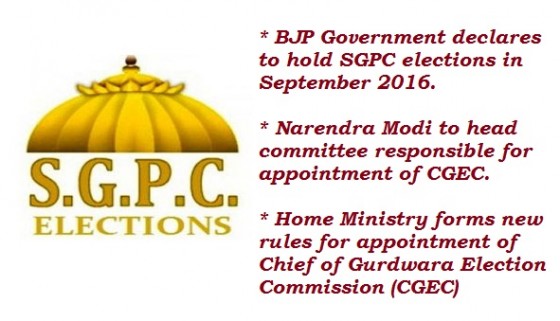 SGPC is a statutory body formed under Indian law which manages the affairs of historic Sikh Gurdwaras in Punjab and some adjoining states. The SGPC also controls the management of Darbar Sahib Amritsar, Akal Takht Saib, Takht Damadama Sahib and Takht Kesgarh Sahib.

The issue of validity of last SGPC elections, held in 2011, is under question and the matter currently pending in the Supreme Court of India (SCI). Moreover the formation of separate Gurdwara Committee, called Haryana Sikh Gurdwara Management Committee (HSGMC), by out-went Congress government in Haryana has added to the complexity of the issue.

It is not clear that whether the elections for members of SGPC will also held in the state of Haryana. With the formation of BJP government in Haryana the future of HSGMC is also under question as the Shiromani Akali Dal (Badal) and the SGPC are urging the BJP to revoke the statute under which the separate committee for Haryana was formed. It is notable that BJP has not close it’s card on this issue so far.