1984 massacres in Trilokpuri: ‘Bodies of hundreds of Sikhs were scattered, some showed signs of life’

Those killed were burnt so that no evidence was left. In fact all over Delhi, the pattern was the same. The killings began in east, west, south and north almost simultaneously on the first evening and continued till the third. Everywhere the bodies were disposed of by burning.

The massacre was planned meticulously and executed with military precision. The mobs were armed with weapons, kerosene, petrol and other inflammable material. They also had copies of the voters list to identify Sikh homes. The involvement of Congressmen in power in organising the mass murders was very evident. Also evident was the connivance of Delhi police. 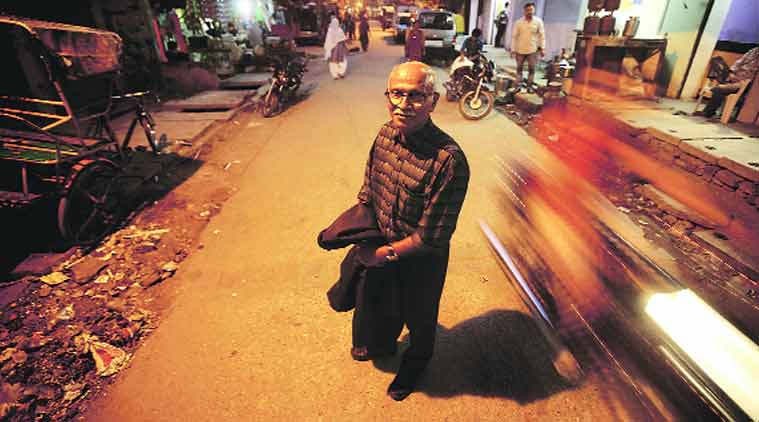 Joseph Maliakan in Trilokpuri, 30 years after what was his most heartrending assignment.

For some reason, the Rangnath Misra Commission rejected outright the majority of the affidavits filed by the victims as well as witnesses. The commission not only rejected Rahul Bedi’s affidavit and mine, but an officer of the commission called me informally to his chamber and dissuaded me from filing an affidavit arguing that I had not suffered in the anti-Sikh pogrom. The state prosecutor accused me of filing reports in The Indian Express at the behest of the management.

Misra later became a Rajya Sabha member, courtesy the Congress. He continued to be appointed to various commissions by the UPA government.

A word about the first committee, headed by Ved Marwah, to inquire into police lapses. Marwah had gone about his work with honesty and seriousness but his findings, if made public, would have indicted not only the police but powerful Congress politicians.

Therefore, the report was buried unceremoniously. Though 30 years have gone by, Marwah, I believe, has a duty to reveal his findings. Now that the Congress is out of power, he has nothing to fear .

While the guilty have gone scot-free (most have been rewarded), the state and society have been  very slack in the matter of providing compensation and rehabilitating the victims. Initially, the government announced compensation of only Rs 10,000 for each person killed. It was doubled after a lot of pleading.

The treatment of the 600 widows is unforgivable. They were given a meagre pension of Rs 500 a month and dumped together in Tilak Vihar, a DDA colony comparable to the worst slum. I have been visiting the colony on and off. In spite of the hardships, they have managed to bring up  their children by themselves. Their courage and resilience give us hope.