USA: Over 50 Errors on Sikhs Corrected in Texas Textbooks

Austin, Texas, USA: A release by the Sikh Coalition says [a]fter nearly six years of on-the-ground advocacy work led by the Sikh Coalition, the Texas Board of Education voted on Friday (Nov. 21, 2014) to approve textbooks that have corrected over 50 inaccuracies about the Sikh religion and its relationship to history.

The Friday vote was the culmination of countless in-person meetings, emails, phone calls, lobbying, and hundreds of hours poring over thousands of textbook pages to find and correct the inaccuracies. Some of the incredible mistakes that were corrected include, “…the religion is based on the Hindu devotion to Vishnu and the Muslim Sufis, or mystics,” and “Sikhism was an attempt to blend aspects of Hinduism and Islam.” 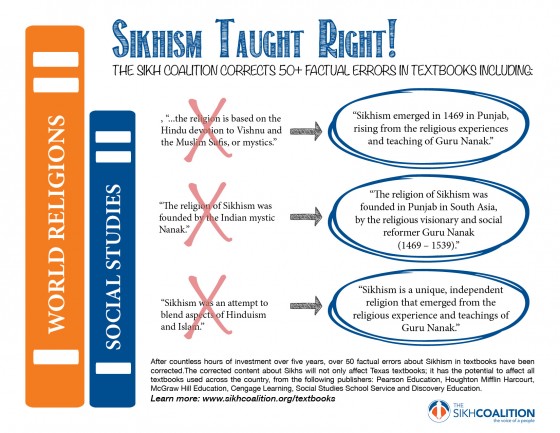 The Sikh Coalition corrected these errors to now read, “Sikhism emerged in 1469 in Punjab, rising from the religious experiences and teaching of Guru Nanak. It is a unique, independent religion”.

“While the Sikh Coalition has worked with educators throughout the country to incorporate the study of Sikhism into the public school curriculum, we strategically invested long-term in Texas because many of the largest textbook manufacturers base their content on Texas. The Texas market for purchasing books dwarfs almost every other state so what Texas decides for their classrooms could follow in up to 46 states across the country” reads the release issued by the Sikh Coalition.

‘This means that changes made in Texas pave the way for millions of children throughout the country to learn about Sikhism accurately’ it reads further. 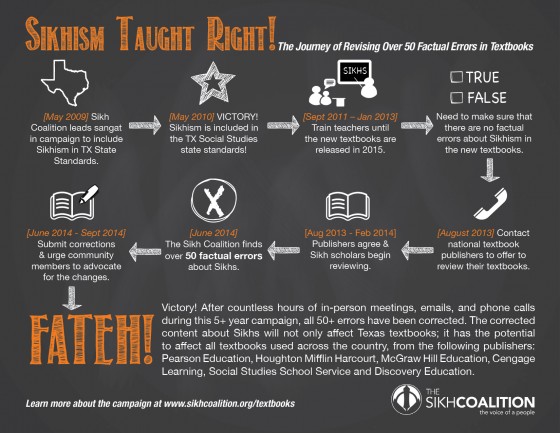 A Timeline of the work: