Patiala, Punjab: A CBI court yesterday (Dec. 01) awarded life imprisonment to four policemen, three of them from Uttar Pradesh, for abducting and then killing a Khanna resident in a fake encounter. In October 1993, these policemen from UP and Punjab subjected a Sikh youth to enforced disappearances and eliminated him declaring him a ‘terrorist’, to get promotions.

Advocate SK Kantiwal said after the victim’s father moved an application in 1996, the Punjab and Haryana High court directed the CBI to register a case against the four policemen for the kidnap and murder of Harjit Singh of Saharanmajra village in Khanna in Bilsandi Bujurg village of Uttar Pradesh on the night of October 12, 1994. 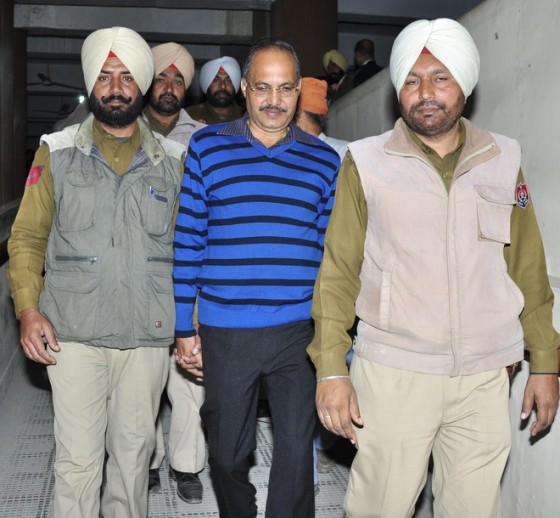 The police take away a police officer from Uttar Pardesh after he was held guilty by a trial court on Monday in a fake encounter case on Monday.

Harjit Singh was abducted from his house by then ASI Harinder Singh on October 6, 1994. “The CBI probe revealed that the UP policemen had mentioned false names in the Payal police station’s daily diary report (DDR). They had done so in connivance with Harinder Singh. They had mentioned in the FIR that Harjit Singh was wanted in a murder case in Haridwar. The case was later found to be false”. He said the CBI had report stated that a police vehicle in Bilsindi Bujurg village had warned the local residents to keep indoors during the night. “At 10 pm that night, two police vehicles entered the village and several gun hots were heard. The police picked up live cartridges from the ‘encounter site’ which were later misplaced”.

“The postmortem report revealed that Harjit Singh had sustained two bullet injuries and had died of shock and haemorrhage. This formed the basis of the trial”, Kantiwal said.

“It was found during the investigation that the police officers had murdered Harjit Singh to earn out-of -turn promotions,” read the CBI chargesheet.

The CBI report says that that RK Singh, posted as inspector, Puwayan police station, was probing the abduction and killing of Amarjit Singh of Paharpur-Balrampur village. It reads: “Prior to October 11, 1993, Harjit Singh’s name did not figure in the investigation. RK Singh fabricated evidence to liquidate him.”

The victim’s father, Mohinder Singh, said he was relieved to have won the long legal battle against the policemen. Relatives of the convicted policemen said they would make an appeal in the High Court.

It is notable that Indian security forces, including Punjab police, were indulged in wide-spread and systematic human rights abuses in 1980s-90s. Enforced disappearances, custodial torture and death, fake encounters were common policing practice during that period.