Jalandhar: Whereas the state government has launched ad-blitzkrieg on the issue of Sikh detainees in jails saying that ‘life imprisonment means imprisonment for entire life and the Sikh political prisoners convicted for imprisonment for life could not be prematurely release, Advocate Jaspal Singh Manjhpur has asked the state government to explain that how some of the cops who were sentenced to imprisonment for life or for less duration, were released much before even completion of their jail terms. It is notable that both Punjab DGP Sumedh Saini in his press conference and Punjab government in it’s advertisements are repeatedly referring to list of Sikh political prisoners released by Advocate Jaspal Singh Manjhpur. 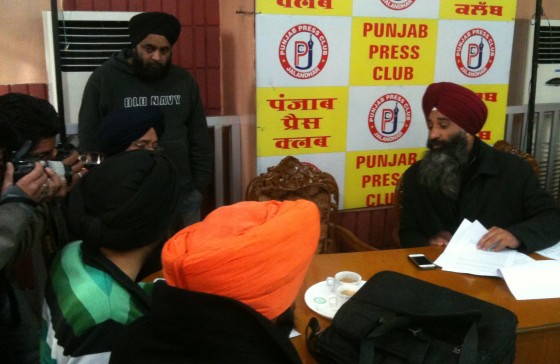 “Now Punjab DGP Sumedh Saini and government advertisements are claiming that life term is for life then they should enlighten the people that how dismissed police inspector Gurmit Pinki was released even before eight years of jail term even as he was sentenced to life imprisonment,” Advocate Jaspal Singh Manjhpur asked while addressing a press conference at press club Jalandhar on January 11.

He said that they were not seeking any favours for Sikh detainees but were asking for equal implementation of law.

“Going by the DGP’s argument state government should release of list of prisoners who were awarded life term but were kept in jail till death”, he said.

Citing two more examples of cops he said DSP Sarwan Dass, who was sentenced to imprisonment for life, was released after completing just five years in jails even when his appeal was pending in the high court; and DSP Japal Singh was released after 20 months of imprisonment and was then reinstated though he was sentenced to seven years imprisonment. “Let the state government explain the rules and procedures followed in these case,” added Manjhpur.

Advocate Manjhpur revealed that the list of 120 persons being repeatedly referred by state government and DGP was released him by last year. ‘They have only the old list even as we have already revised as several were released and the new list had 83 names,’ he said.

Holding that now state government and DGP were citing a SC order which stayed remission to life prisoners advocate Manjhpur asked that then Punjab CM Parkash Singh Badal should tell the people that why was he writing to union government and other state government for release of 13 prisoners. “Were the CM and rest in his government were unaware of this legal proposition,” he said while adding “this reflected that Punjab government was either passing the buck or befooling the people”.

“The state government should also tell the people that what it did for last one year on the issue even as over a year back also it had said that it would strive for the release of Sikh prisoners,” he asked.

While providing copies of the SC order of July 9 which restrained state government from exercising power of remission to life convicts, advocate Manjhpur pointed out that stay was on remission only but not on pardons, reprieves, suspension or commuting of sentence as per Article 161 of constitution. “Article 72 which defined powers of the President in this regards gives him more powers and Punjab government can get the issue resolved at the level of President when they are partners in Central government,” he said.