Finally, Punjabi cinema is moving towards the sifting process, the good from the bad. And finally, we see some good coming our way. Punjabi film Eh Janam Tumhare Lekhe (EJTL) is one such good film that has come our way. Even though it comes with some lacunae, it is nonetheless an appreciable attempt to bring forth the life, dedication and sincere efforts of Bhagat Puran Singh on screen. Directed by Harjit Singh, Eh Janam Tumhare Lekhe (EJTL) is a biopic on Bhagat Puran Singh, the man behind the Pingalwara Charitable Society. 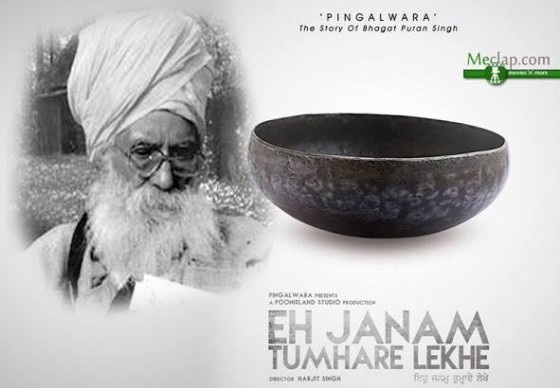 Eh Janam Tumhare Lekhe (EJTL) is a film that stands apart, but is marred by some flaws here and there. To begin with, the film would have looked better with a slightly tighter script. With some scenes stretched, the film falls in the dicey situation of the audience losing grip. Also, some more facts could have helped the audience who are not familiar with this great personality. Despite this, the film has some amazing sets and dialogues that don’t look they have been made up. The director is credited for giving an exact look and feel of Bhagat Puran Singh through his character. The film also has some touching music that pulls the strings of our heart.

Now for the actor, who stole the show right away — Pawan Malhotra who plays the role of Bhagat Puran Singh; he has given a fabulous performance, which is every bit believable to the tee. The way Pawan Malhotra has been portrayed in terms of his mannerism and his looks should be applauded. If you try to join some missing links, it is because the story has too much too offer in too little time. The director has picked up characters that one would relate to. In fact, towards the fag end one actually feels for Bhagat Puran Singh and what all he had to go through for his work.

So, next time, if you lend a helping hand to the needy, you know the film has rubbed its effect.