Sikh organizations of UK recently released “The Sikh Manifesto 2015-2020“. The document is released ahead of general elections for the British parliament. It is considered to be first document of it’s kind by the Sikh diaspora in England. Sikh Siyasat News has decided to serialize this document for it’s readers. Text below is verbatim reproduction of “SECTION 1” (titled: MORE EFFECTIVE REPRESENTATION IN PARLIAMENT) part of the Sikh Manifesto (pp. 6 to 7 of the original document). – Editor, Sikh Siyasat News. 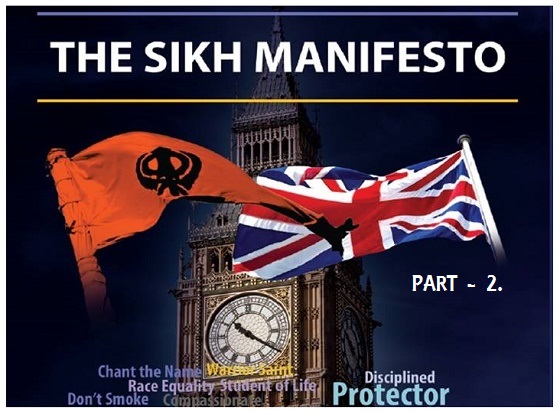 Effective representation of Sikhs and Sikh issues in Parliament – Political parties and government should have transparent policies to ensure Parliament represents the people it serves and there is equality of opportunity. Britain’s diverse multi-cultural society, including the Sikh community should be reflected in the make-up of its Parliament. This is vital for good governance of the nation as it will promote social cohesion and equal political rights of all its citizens.

Likelihood of no Sikh MPs in the 2015-2020 Parliament – As far as the Sikh community is concerned there is a possibility that following the General Election in May 2015 there may be no Sikh MPs, although the demographics suggest there should be around half a dozen. All the main political parties need to do much more in the next five years to attract and select Sikh candidates to come forward and become MPs from seats from which they have a reasonable chance of getting elected.

In the last 10 years there have only been a total of five Sikh MPs (three Labour, one Conservative and one Liberal Democrat), none have been visible identity Sikhs (i.e. turban-wearing) or women suggesting a possible bias in the selection process. Labour has selected two turban wearing Sikh candidates for May 2015, but both are in seats where they will struggle to win. The Conservatives have selected one turban wearing Sikh candidate for May 2015, but again in a relatively safe Labour seat and another is on the Conservatives approved list, but has not yet been selected in a seat. The situation for effective Sikh representation in the House of Commons needs urgent improvement.

By contrast, other minority communities appear to be far better integrated and accepted in the system and we celebrate their success. For example, there are currently 24 MPs of Jewish decent and many in senior positions despite the Jewish population being half that of the British Sikh community. Following the General Election there are expected to be 6 Hindu MPs and 11 Muslim MPs split almost evenly between Labour and the Conservatives.

More Sikhs, especially visible Sikh men and Sikh women, should be encouraged to enter politics and barriers preventing them from getting elected as representatives, removed – The Sikh community also shares the responsibility for the lack of Sikh identity MPs and insufficient number of councillors. The Sikh community needs to work with the political parties to address why so few Sikhs are willing to enter politics and to remove the barriers that exist, which appear to be far greater for turban-wearing Sikh men and Sikh women. To get a grip on the size of the challenge that confronts British Sikhs, we need to objectively assess just how far we have come and how far we have to go on this important issue. The rate of progress in selecting and electing Sikhs has been painfully slow.

Therefore, it is important that political parties work with their Sikh members, with members who are not Sikhs, and with Sikhs who are not (yet) members, to encourage and train and listen to Sikh voices. This is a process which should start immediately. If the root causes and inbuilt bias in the selection/election process are addressed, we should expect a more level playing field for Sikh candidates by 2020. The measure of success would be several Sikh MPs and at least 50 more local councillors by 2020.

Having duly consulted the Opposition parties, the Prime Minister after the General Election should ensure a number of Sikhs are appointed to the House of Lords at the earliest opportunity – Representation in the House of Lords is more in the hands of the political parties and their leaders as nearly all are now party political appointees. Sikhs are hugely under-represented in the Lords while other minorities are clearly over-represented. Currently there are three Sikhs in the House Lords, two Conservative and a cross-bencher. Again the demographics suggest there should be at least eight Sikhs in the House of Lords, although, given the lack of Sikh representation in the Commons the party leaders could choose to have more Sikhs in the Lords. In comparison there are 23 Jewish, 20 Hindu and 13 Muslim peers. These are split almost evenly across the three main political parties.

Overall the Conservatives have one Sikh MP and two Sikhs in the House of Lords, while both Labour and the Liberal Democrats have no Sikh representation in either Houses of Parliament. Labour, as one of the two larger parties that has traditionally attracted the Sikh vote, is particularly vulnerable to criticism for a lack of Sikh representation in Parliament, especially in the House of Lords where their one Sikh Lord passed away in January 2013 and has not been replaced.