Sikh organizations of UK recently released “The Sikh Manifesto 2015-2020“. The document is released ahead of general elections for the British parliament. It is considered to be first document of it’s kind by the Sikh diaspora in England. Sikh Siyasat News has decided to serialize this document for it’s readers. Text below is verbatim reproduction of “SECTION 2” (titled: SEPARATE ETHNIC MONITORING OF SIKHS) part of the Sikh Manifesto (pp. 8 to 10 of the original document). – Editor, Sikh Siyasat News. 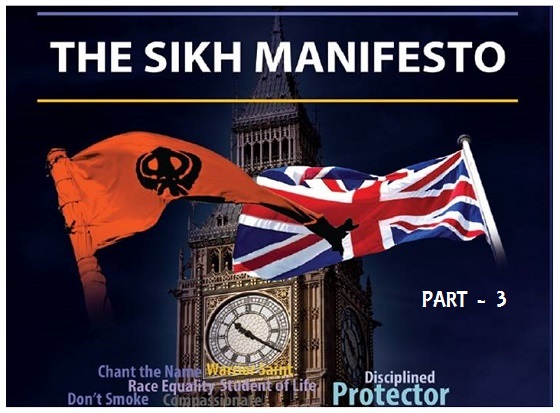 Changing the Office for National Statistics (ONS) guidance to public bodies on collecting, monitoring and using ethnic group data by requiring Sikhs to be monitored as a distinct ethnic group and agreeing to a separate ethnic tick box for Sikhs in the 2021 Census

Public bodies to monitor Sikhs as a distinct ethnic group- As a nation, our Government and its departments are not fully aware of the extent of barriers that Sikhs face as a distinct religio-ethnic community. British Sikhs face obstacles, for example, in securing employment, progression into senior jobs, accessing healthcare according to specific needs or indeed in analysing the full Sikh contribution as a community to economic growth in different sectors. This is where Sikh monitoring could have a demonstrable impact on the day to day lives of British Sikhs.

In 1983 the Mandla vs Lee case saw the House of Lords use a set of criteria from the Race Relations Act (1976) (since subsumed into the Equality Act 2010) to define Sikhs as a distinct ethnic group. The criteria used stated that to be a distinct ethnic group, the said group needs to have a long shared history which the group consciously keeps as distinct from other groups and has own culture and traditions. Supplementary criteria concerning language, geographical origins, literature, and history of persecution were also used to come to the finding that Sikhs are a distinct ethnic group. Yet, despite this, the law of the UK is not being implemented in respect of the Census and other official statistics.

Public bodies monitor ethnicity across all services whereas religious statistics are rarely used for this purpose. Separate Sikh ethnic monitoring should be the basis for UK’s statistical expertise, the ONS analysis, and for Government policy: for allocation of resources and community development programmes through the central government departments and agencies and locally delivered services.

ONS Ethnic Group Classification Guidance is regularly reviewed and applied by public bodies. After the 2021 Census, administrative data sources from public bodies will replace the Census as the key method of collating information of national use. It is imperative that the classification guidance to public bodies states that Sikhs should be measured as an ethnic group in order to deliver better informed services.

One example of what this means in practice is that without monitoring Sikhs as a distinct group, for example, how would the United Nations Committee on the Rights of the Child (UNCRC) know that 31% of Sikh children feel unfairly discriminated against. The reality is UNCRC would be able to do very little to examine discrimination against Sikh children or put in place effective plans and measures to reduce this without separate monitoring. More importantly, what could be the possibilities and the potential impact on the lives of Sikh children if this information was readily available and fed into the policy decisions by the Department for Education?

Similarly a study by Cancer Research UK demonstrated reduced risk of breast cancer in Punjabi Hindu women and an increased risk for Sikh women and the British Medical Journal (BMJ) in 2009 found that alcoholism exceptionally high amongst ‘Irish’, ‘Scottish’ and ‘Indian’ men, when further examined the majority of those at risk in the ‘Indian’ category were Sikh men. Yet, policy through to service delivery in this issue has been criticised for perpetuating a myth that alcohol related harm is low in all UK South Asians. The BMJ highlights that Sikh men have a mortality rate which is four times higher than British white men for alcoholic liver disease. How many lives could be saved or diseases prevented if we monitor people to give them timely access to the services they need? The Department of Health has stated that ethnicity indicators significantly explain the needs in the various models used for resource allocation.

Separate ethnic tick box for Sikhs in the 2021 Census – The Census results are used as the key barometer for public service planning and allocation of resources. Therefore Sikhs, as other ethnic groups, need to be counted in order to receive relevant and fair services. The 2021 Census will be the last Census and therefore our only opportunity to robustly count the number of Sikhs in England and Wales (and Scotland where there will be a separate Census).

It is often cited that ‘what gets counted gets done’ when we consider why we need a Census or national monitoring processes. Policy-makers currently refer to the Census data as a default position to understand the make-up of the nation. Inaccuracies and omissions in the Census impact more than just getting the figures right for recording purposes, although this in itself is important. The ethnicity question in the Census is a compulsory one unlike the religion question. This leads to widely reported disparities with most publications stating the actual number of Sikhs is circa 700,000 whereas some limit the number of Sikhs by simply quoting the much lower2011 Census figure using the religious question response only. Inaccurate information means that the real needs and contributions of individuals and communities are hidden which is to the detriment of those very people who have given so much to the UK. The 2021 Census will be the last Census, it is imperative that it includes Sikhs as an ethnic tick box and thereafter essential that classification guidance from the Office for National Statistics recommends public bodies monitor Sikhs as an ethnic group, per legislation and community demand.

In the past some have commented that the ‘Indian’ tick box would suffice. However time and time again this has been shown to be a poor proxy measure that amalgamates distinct needs with a wider group. Much as would be the case by combining White British with White European. Respondents to a survey targeting British Sikhs, when asked how they identify themselves 4% selected ‘Indian’, 1% selected ‘Asian’ whilst 67% selected ‘Sikh’. This clearly suggests that when given the choice ‘Sikh’ is the most commonly selected ethnic characteristic chosen by Sikhs. Whereas the ‘Indian’ and ‘Asian’ options were those Sikhs least identified themselves with.

Demand for separate Sikh monitoring from the Sikh community has grown significantly, in part this demand was mobilised in 2010 in the run-up to the 2011 Census through a media campaign by the Sikh Federation (UK) supported by an in-depth report highlighting the strength of need, lack of alternative sources and usability of a separate Sikh tick box. Sikhs were galvanised by the campaign with many reporting that they felt better informed as to the importance of separate monitoring and wanting to choose an option that best represented their actual ethnic group.

This saw an increase in Sikhs selecting the ‘Any Other Ethnic Group’ box and writing in ‘Sikh’. In the 2001 Census, just over 10,000 Sikhs protested and wrote Sikh as their ethnic group, but in the 2011 Census this increased by 400%. The momentum generated and the awareness of Sikhs has significantly increased. We now know through our own surveys that when we give Sikhs the option (i.e. a tick box) over two-thirds will tick Sikh and in the 2011 Census over 40,000 Sikhs protested by not using one of the existing ethnic group categories, but chose to write in “Sikh”, a four-fold increase on the previous Census.

The 2021 Census will be the last Census. We understand it will be used for validation purposes for future administrative sources and therefore it is essential that this final Census sets precedence for future monitoring.