Ludhiana: Punjab DGP Sumedh Saini has once again said that Sikh political prisoners could not be released. Saini, who was accompanied by Jagraon SSP Ravcharan Singh Brar during press conference, alleged that certain elements were trying to disrupt peace in the state.

Saini said of the 82 persons, 25 were undertrials and could not be released unless granted bail. Among them were Harminder Singh alias Mintoo (KLF), Jagtar Singh Tara (KTF), Gurpreet Singh alias Gopi, Ramandeep alias Goldy and Rattandeep (BTKF). He said eight persons on the list described as ‘senior citizens’ had been convicted in the 1987 Ludhiana bank dacoity case in 2012. 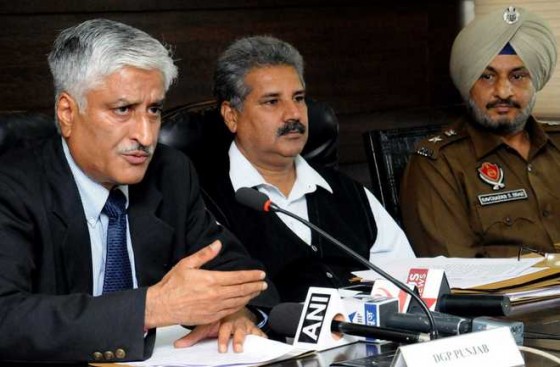 He said of the 82 prisoners, the cases of only two could be considered for pre-mature release. But owing to a Supreme Court order, no lifer had been considered for early release after July 2014.

Soon after Sumedh Saini addressed the press conference in Chandigarh, Ludhiana police launched a crack down against fasting Sikh activist Bapu Surat Singh Khasla and his supporters in Ludhiana.

Unlike his previous press conference on the issue, Sumedh Saini referred to updated list of Sikh political prisoners but he did not refrain from mis-interpreting the list. He gave an impression as if Sikh organizations or Surat Singh Khasla were demanding release of all persons included in the list. Bapu Surat Singh’s representatives told Sikh Siyasat News (SSN) that he is demanding release of those Sikh political prisoners who were sentenced to imprisonment for life and who have served minimum mandatory terms of their sentences.

“Besides this Surat Singh Khalsa is demanding release of other (non-Sikh or non-political) life-terms convicts who are still imprisoned in Punjab even after serving minimum mandatory terms of their sentences”.

Advocate Jaspal Singh Manjhpur who maintains the list of Sikh political prisoners alleged that by referring repeatedly to all persons included in the list, Punjab DGP Sumedh Saini was attempting to confuse the issue and misguide the people. He said that even a bare sight on the list makes clear that it is a list of all Sikh political prisoners, including under-trials and convicted persons.

“No one has ever demanded release of all persons included in the list”, said Advocate Manjhpur, adding that Punjab government should come clean on the issue of those Sikh political prisoners who remains imprisoned even after completing minimum mandatory terms of their sentences.