“We have received a letter from CBFC which says that ‘the Borad has come to the conclusion that a certificate can not be issued for its (Patta Patta Singhan Da Vairi movie’s) exhibition”.

Sandeep Singh declared to appeal to the Film Certification Appellate Tribunal (FCAT) against decision of the CBFC.

The movie was set to be released globally on April 03. 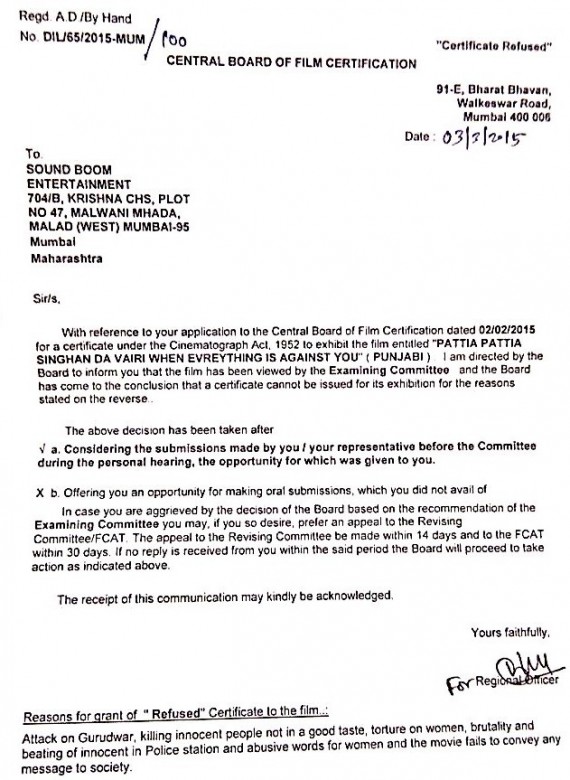 According to producers the movie Patta Patta Singhan Da Vairi is “based” on events of 1980s-90s in Punjab. They say that it’s a film based on Sikh militant movement.

Producers of the movie maintain that their film portrays Sikh militant movements in positive light.

There is sudden rise in movies on events of 1980s-90s in Punjab in recent years. After the success of “Sadda Haq” (2013), the Punjabi filmmakers started showing extensive interest in “1984” and Sikh militancy related themes. Certain Sikh circles have already expressed concerns over weak artistic and directional presentation of recent movies on post-1984 era related themes.

Raj Kakra’s last movie, Kaum De Heere was also banned in India; though it was released in other countries. The movie was praised for being presenting the story of Bhai Beant Singh, Satwant Singh and Kehar Singh in positive light, however it was criticized for week artistic and directions aspects.