Amritsar, Punjab: Sikh used to follow a tradition prohibiting the depiction of Sikh Gurus in any form as any such depiction would always remain under limitation of mind and thought. The first attempt to depict the Sikh Gurus, were portraits of Guru Sahib that were questioned by Sikh intellectuals and High spirited Sikhs like Prof. Puran Singh. But, unfortunately, the portraits of Sikh Gurus received acceptance amongst the Sikh circles. 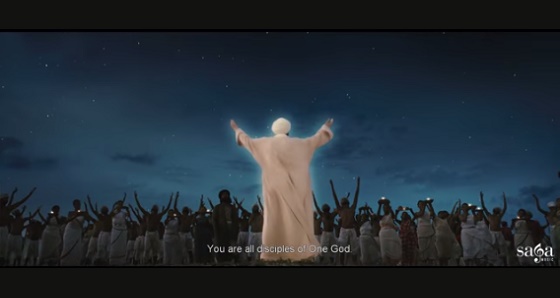 A still from Teaser of Nanak Shah Fakir Movie

Official teaser of an upcoming movie called “Nanak Shah Fakir” shows that the moive depicts Guru Nank Ji, first Sikh Guru. Makers of the movie says that “face of Guru Nanak” is not shown in the movie and light or back scenes are used to show Guru Nanak Ji.

This movie is another step forward in depiction of Sikh Gurus against the Sikh tradition.

The movie is going to be released on April 17.

Sikh Siyasat feels that the issue should be seriously and thoroughly discussed by the Sikh intellectuals and global Sikh community.