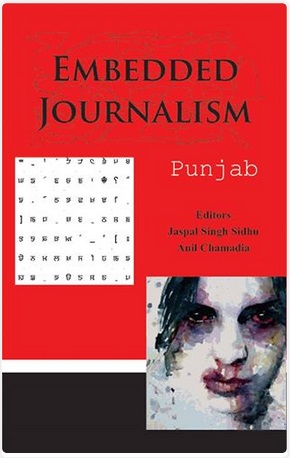 Since Independence the alienation of a large section of Sikhs had been on the rise from the Indian state, which, in their perceptions, was “majoritarian Hindu” in character. One of the main reasons for this was the nature of Indian federalism, which remains biased in favour of the centre. Against a backdrop of centre’s refusal to acknowledge regions’ legitimate demands for autonomy, anti-government agitations began to ferment, particularly in the 1960s, the1970s and the 1980s in Punjab. This, in turn, invited the wrath of the Indian state as thousands of Sikhs were arrested, tortured, maimed for life, raped and killed in Punjab, Delhi and elsewhere. But instead of representing the true picture of story and working as a watchdog of human rights, mainstream Indian media, both government and non-government, were colluded with the Indian state, as argued by a new study on state violence and role of media in Punjab.

The new book Embedded Journalism: Punjab shows that India media worked as ideological apparatus of the state. According to the veteran journalists Jaspal Singh Sidhu and Anil Chamadia, who have edited the volume, media were a “complicit companion” of the Indian State, its intelligence-wing, army and police and their coverage of the Punjab crisis was “biased” and “slanted” as they “fuelled” anti-Sikhs violence by constructing the image of Sikhs as “demonic”, “seditious”, “terrorists “and “traitor”. (p. 12.) The purpose of the present work, as claimed by the editors, is to give ‘the reader a peep into the “other side” of the Punjab imbroglio, hitherto generally unknown, so that the perceptive mind can discern how the Sikh minority, struggling for a rightful place in the power-structure, was painted “anti-national”.’

Media: A Complicit Companion of State

The collusion of media with state and corporate forces has drawn the attention of a number of scholars. For example, Edward S. Herman and Noam Chomsky (Manufacturing Consent: The Political Economy of the Mass Media, 1988) rightly show that the US media have been in the service of the American state as well as its corporate forces. For example, the USA media unabashedly justified the bloodshed of millions in Vietnam. According to Herman and Chomsky, in spite of the US aggression in the Indo-China region–which led to the death of three-million lives, leaving around four and half-million wounded with 300,000 missing and two millions being harmed by toxic chemicals–the US media not only desisted from using the term “aggression” for this but also backed up their government. 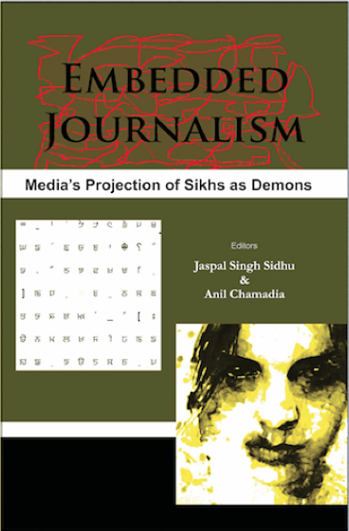 Similarly, Jaspal Singh Sidhu, in his essay ‘Embedded Media Builds Hegemonic Narrative for Nation-State’, argues that India media, since the days of the colonial rule, has been an integral part of the state project. With the British ruling classes replaced by native upper classes and castes, mostly Brahmins, media contributed to the establishment of Indian state “based on Brahminical caste-supremacy”. Since advertisements of the government and corporate forces, not the subscription from readers, are main sources of income for India media, they are keen to crawl to their political and corporate masters.

To explain the phenomenon of media’s collusion with states, many scholars have developed the concept of “embedded journalism”. Just as the global media were “fed” news by the USA armies in 2002 Iraq War, much in the same way Indian media, while covering the Punjab crisis, propagated what was dictated and implanted to them by the government, intelligence agencies, police and armies. (p. 43.)

Applying the framework of embedded journalism, the contributors to the anthology have powerfully contended that media distorted facts. For example, All India Radio (AIR) and Doordarshan misreported the issue. They aired ruling party’s views as the participants in their programmes were carefully selected to be pro-establishment. For example, while the event of eminent civilians returning their medals in protest against the Operation Blue Star (1984) was hardly reported, the opinions, which hailed army’s stance, were prominently covered. Most shockingly, the religious identity of the assassins of Prime Minister Indira Gandhi was mentioned by AIR and Doordarshan with a view to instigating majority’s anger against minority Sikh community.

Some other examples of the contributors about media’s propagandas are their attempt to “demonize” Sikhs as rumours were spread that narcotics, including hashish, were found inside the Golden Temple, which were later denied. ‘The attempt behind such news fabrication’, rues Sidhu, ‘was to project an image of the extremists as drug addicts with smuggling links.’(pp. 56-57.) Apart from narcotics, the false news of recovery of arms, including medium range machine guns, were also broadcast. Besides, there was a claim made by media that no damage was done to the Golden Temple but there were, as shown by Sidhu, as many as 300 bullet marks on Harmindar Sahib. (p. 57.)

Apart from government’s press, non-government media also came in for a sharp criticism. Even the coverage of national dailies like The Times of India and The Hindustan Times often operated within the Hindu nationalist communal agendas.

Besides Hindi and English dailies, Communists-run newspapers did not escape criticism. Sidhu argues that Left-controlled newspapers in Gurumukhi script such as Nawan Zamaanaa, Lok Lehar, which was later published as Des Sewak, too reported with nationalist tone and dismissed Akali’s demand as “Sikh communalism”. (p. 32.)

Moving from national to international media, Ram Narayan Kumar’s essay, ‘The International Media in Punjab: A Study’, evaluates the role of international newspapers and shows that they also fell short of reporting the truth. For Kumar, international media were in a hurry to report and had little time and energy to go to field. Thus they relied on information fed by Indian officials. (pp. 114-117) Further, Kumar expresses his disappointment at the failure of the National Human Rights Commission (NHRC) and the Supreme Court (SC) to dispense justice. For him, the failure lies in the nature of “majoritarian” character of India democracy.

Before I close let me add a few points to Kumar’s concern about the limitation of Indian democracy. How could the Indian state carry out so much bloodshed with impunity in the “largest democracy” of the world? If democracy claims to uphold the right to life and extend equal citizenship to all members of its political community irrespective of caste, class, religion, race and gender etc., then why were the minority Sikhs denied their basic human rights in a democratic India? Is it not a paradox of Indian democracy that while Afzal Guru, accused in Parliament attack case, was hanged to death to satisfy “collective conscience of the nation”–despite the fact that his trial, according to human rights activists, was “vitiated”, his legal defence was “compromised”, and “forged” evidences were “admitted”—the militarized and violator of human rights, the Indian state, continues to receive considerable mandate from a large section of people? One plausible answer to this is perhaps the role of media in constructing consent for state’s actions among a large social group. Given this, the critical study of media’s role becomes very important. This book, therefore, is an important counter-hegemonic intervention.