Tarn Taran, Punjab: A written statement by the Sikh Youth Front (SYF) states that the Sikh youth group, in association with of Sikh Youth Federation Bhindranwala, is going to mark martyrdom anniversary of Shaheed Sukhdev Singh Sakhira at his village Sakhira near Tarn Taran Sahib. Bhai Sukhdev Singh Sakhira was one of the main leaders of armed Sikh struggle for freedom, after the Ghallughara (holocaust) of 1984. 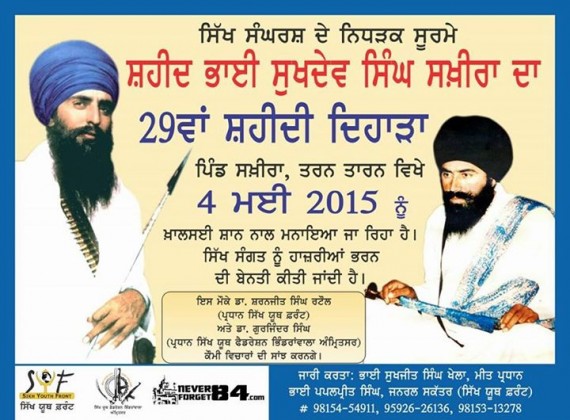 Dr. Gurjinder Singh (President, Sikh Youth Federation Bhindranwala) said that observing martyrdom anniversaries of Sikh freedom fighters was a duty of Sikh youth activists. ‘Awareness about the role models of Sikh struggle is the need of the hour’ he added.