Amritsar: Team members of upcoming Punjabi movie ‘AAZAADI’ recently visited Amritsar, where members of Sikh Youth Front extended their support to the movie. The movie is production of Tarsem Singh Bhatti Mustafabadi and it is likely to hit screens worldwide on June 12.

Director of the movie Sri Devi Sharma informed that this movie is based on the brethren feeling across civilian population of different religion residing in Punjab. ‘This movie portrays the trend of fake encounters performed by Punjab Police during last two decades of 20th century’ he added. 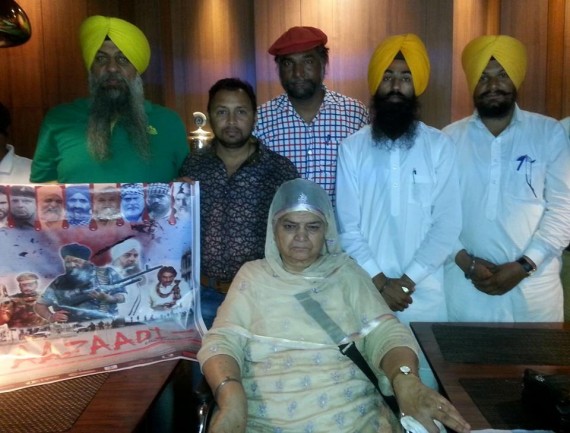 Editor of monthly Panthik Magazine ‘Vangaar’ S. Baljit Singh Khalsa said that the state media always adopted biased approach towards Sikh Struggle. He appealed to the people of Punjab to support such movies that presents the fair image of Sikh struggle.

It is notable that the trauma of 1984 and the ‘movement’ of post-1984 period is being treated as a ‘formula’ by Punjabi filmmakers. Many films on 1984 and aftermath have arrived in last two years. The success of ‘Sadda Haq’ (2013) attracted attention of other Punjabi filmmakers.