Advocate Shiv Kartar Singh Sekhon information that Rupinder Singh and Jaswinder Singh have been booked by the police under section 295-A and 120-B (IPC) under FIR number 128/2015 registered at Bajakhana police station.

Rupinder Singh was brought to the court on wheel chair in wake of back injury. Eyewitnesses, who were present at the court complex during today’s hearing told Sikh Siyasat News (SSN) that both bothers appeared to have been tortured by the police. 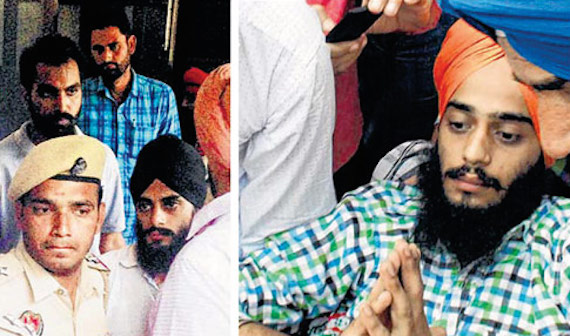 “It seems that Jaswinder Singh was more tortured by the police”, a person who was present during today’s hearing told SSN.

The sisters of Rupinder Singh and Jaswinder Singh were allowed to meet their brothers in the court room.

Hundreds of Sikhs had gathered outside the court complex during today’s hearing to show their support to Rupinder Singh and Jaswinder Singh.

Sikh sangat said that Rupinder and Jaswinder are falsely framed by the district police in a case related to beadbi of Guru Granth Sahib at Bargari.