Jalandhar: The Panthic Talmel Sangathan (PTS) has announced to contest the Shiromani Gurdwara Prabhandak Committee (SGPC) elections. The PTS leaders said that it was the call of the hour to take part in SGPC elections to free the historic Sikh Gurdwaras and Takht Sahibs from the clinches of Badals.

Talking to media persons at Jalandhar yesterday, PTS leaders Giani Kewal Singh, former SGPC member Jaswinder Singh Advocate, Parminder Singh of Sikh Sewak Society and Prabhsharan Singh of Gurmat Gyan Missionary College said that the SGPC has been rapidly politicised by the ruling regime of Shiromani Akali Dal (Badal). They further said that such politicisation of the religious body has led to degeneration of the working of vital Sikh institutions, including the Takht Sahibs. 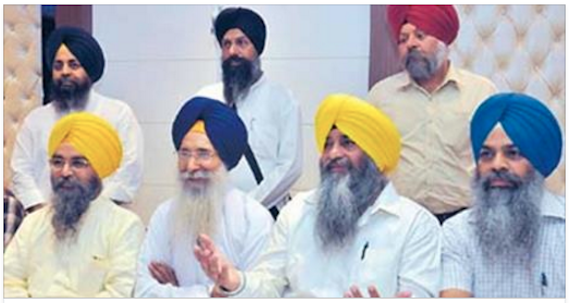 Giani Kewal Singh and others addressing the press conference

PTS leaders said that a hundred member committee is formed for the purpose of better co-ordinators. They added that the committee would also oversee the preparations of the SGPC elections. They further said that the district co-ordinators will be appointed in coming days.

It is pertinent to mention here that the polls for SGPC were last held in 2011 but the winning members were not notified in wake of a court petition related to voting rights of Sahijdharis. The voting rights of Sahijdharis were recently revoked by an amendment law passed by the Indian parliament. Now the SGPC, controlled by ruling SAD (Badal), is preparing to seek Indian Supreme Court’s directions to get notified the membership of those elected in 2011. If such a notification is issued the SGPC elections could be deferred for next five years.