California, USA: August 5, 2016 marks the fourth anniversary of the tragic shooting inside the Oak Creek Gurdwara. In an update, the Sikh Coalition said: [o]ur communities were forever changed when a neo-Nazi gunman entered the Oak Creek Gurdwara and killed six innocent worshippers, wounded several others, and unsuccessfully attempted to destroy the unity across our diverse nation.

The US based civil rights and advocacy group has announced to launch fourth annual National Day of Seva (selfless community service). The Sikh Coalition has also urged people to organise their own events to mark the day.

“In Orlando, our country continues to mourn over one of the deadliest bias-motivated mass shootings in U.S. history,” said Harjit Kaur, Sikh Coalition Community Development Manager. “The Sikh community knows the heartbreaking pain that comes from attacks motivated by hate, and we offer our deepest thoughts and prayers to the victims’ families as we continue to grieve.” 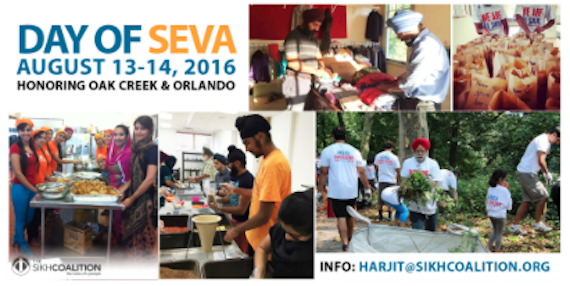 “This August, as Sikhs across the country come together for the fourth annual National Day of Seva, we urge the nation to stand in solidarity against hate. An attack against one community is an attack against us all. Through service, let’s stand with our neighbors of all faiths, races and sexual orientation to unequivocally denounce hatred” reads a release by the Sikh Coalition.

“The Oak Creek sangat is organizing their annual Chardhi Kala 6K Memorial Walk and Run, which will be held on Saturday, August 5, 2016, in Oak Creek, Wisconsin. We strongly encourage the community to attend the 6K walk/run and to participate in the blood drive hosted by the Oak Creek sangat” said Harjit Kaur.

“For those who cannot attend the walk/run in Oak Creek, the Sikh Coalition is honored to host Day of Seva on August 13-14, 2016 so communities across the whole country can show their solidarity with all those impacted by hate crimes” she added.