After walking through much water and slush the hundreds of marchers were given a resounding welcome at Ram Bagh gardens with a Gatka performance by children of Central Khalsa Orphanage accompanied by musicians of Iskon Hare Krishna Society. It raised the spirits of the gathering as well as passerby’s at the venue of the Citizens meet. 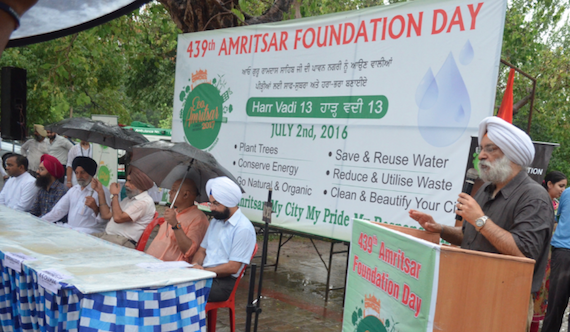 EcoAmritsar started celebrating AFD on the onset of its campaign in 2012. The goal of the program initiated by Eco Sikh is to make a substantive change in the city by 2017, in Amritsar’s 440th year of establishment. In its 4 year journey the EcoAmritsar program has been instrumental in planting hundreds of trees of indigenous varieties. It has started the concept of Green Nagar Kirtan, which is being emulated in India as well as overseas. Corporates & citizens are encouraged to Save, Harvest & Recycle water. Institutions are being urged to adopt energy saving devices & renewable energy alternatives. Under the program various workshops have been conducted for nontoxic natural farming, and models created for zero garbage households & zero disposal parks. EcoAmritsar has worked with fellow stakeholders who not only adopted the EcoAmritsar program as their own, but introduced many new initiatives as well. A special source of satisfaction is our SGPC engagement and its Organic Langar concept, Plantation programs, energy efficiency, water conservation possibilities. Annual celebrations of AFD & Sikh Environment Day reconnects people to the causes dear to the city.

The administration was represented by Tejinderpal Singh Sandhu, ADC who assured the congregation of their wholehearted support and appreciation. After a thorough drenching, the gathering was served hot tea by Pingalwara Society and snacks by Avaas hospitality. Stakeholders were presented saplings for plantation and awards of recognition for efforts made during the year.

In his welcome address to the citizens, head of EcoAmritsar Gunbir Singh complimented the participants for their energy despite the rain. He said that he was confident that by the year 2017, Amritsar shall see a major change for the better. Plantation projects have already begun by various stakeholders to make good the loss over the last couple of years. Sanitation programs he stated need more commitment by the state, but the citizens need to come forward to assist by segregated their green waste, and keeping their neighbourhoods clean. Curbing wastage of water shall also be a core agenda this year. A new hope has been generated with a delightful new team of young administrators in Municipal Commissioner Sonali Giri & Deputy Commissioner Varun Roojam who are committed to spreading goodness in the city. The vigour and spirit of the city this year, the plans for execution under various central and state schemes, gives us confidence that change is happening.