Press Release: Coordination of Democratic Rights Organizations, (CDRO), expresses grave concern at the situation in Kashmir which has seen the death of 23 people and injuries to more than 300 persons over the last three days at the hands of Police and the Para military forces. The killing of Burhan Muzaffar Wani, a young leader of an armed opposition group and icon for the youth in Kashmir, by security forces on the 8th July, 2016 saw thousands of protesters descending on the streets of various towns in Kashmir, especially in the southern districts of Anantnag, Pulwama, Kulgam and Bijbehera. Burhan Wani had caught the imagination of the Kashmiri youth, who are caught in an endless cycle of violence and repression by Indian security forces. Although the ADG of police S.M. Sahai has publicly stated that the police action was “restrained”, numerous reports from the ground speak of police tear-gassing and then shooting bullets and pellets at protesters to kill. Many of the killed protesters have been found with bullet injuries in the chest and pellet injuries to eyes showing that the police shot to kill, rather than incapacitate the protesters. 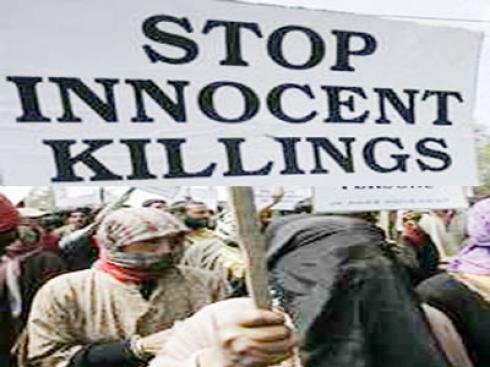 These incidents are reflective of the ground situation in Kashmir, which is one of the most militarized areas in the world today, where six lakh Indian army and paramilitary personnel are deployed against sixty lakh highly aggrieved people. The rise of Burhan Wani as a popular leader of armed resistance is a result of this process, as he embodied and gave expression to the deep frustrations of the Kashmiri youth, suffering for long under the repression of the Indian security forces. The deliberate failure of the Indian state to recognize these frustrations, the constant attempt to externalize the causes of the conflict by claiming that it is fomented by Pakistan and the extreme repression let loose on the population by the Indian army and paramilitary forces has led to this situation that the pent up anger is expressed in these mass protests. And the violence with which these protests are met, give rise to further anger and frustration among the Kashmiri youth, who know that there are no democratic means for venting their grievances or meeting their aspirations. Contrary to claims by the security forces that the militancy in Kashmir is fomented by a handful of militants who have crossed over from Pakistan, Burhan Wani was a local youth who joined armed opposition for the same reasons that thousands of young Kashmiris have been coming out on the streets to pelt stones at Indian security forces. It is no wonder that 40,000 people assembled at his funeral in his home village in Tral.

CDRO condemns the repression by the security forces in Kashmir and calls for a sensible handling of the situation by the state and central governments such that further deaths do not occur. The events in Kashmir have shown repeatedly, (for example in April this year when five people were killed in police firing on unarmed people who were protesting against the alleged molestation of a teenage girl by security personnel in Handwara), that it is the high-handed action by the security forces which aggravate an already volatile situation which is marked by absence of politics sans bloodshed. CDRO reiterates that these wars, and never ending military suppression must give way to a political process which alone can bring about a democratic solution and bring peace to a people who have suffered grievously for nearly seven decades under Indian tutelage.
C. Chandrasekhar (CLC, Andhra Pradesh), Asish Gupta (PUDR, Delhi), Pritpal Singh (AFDR, Punjab), Phulendro Konsam (COHR, Manipur) and Tapas Chakraborty (APDR, West Bengal) (Coordinators of CDRO).