From funerals to freedom for Kashmir: undoing the Great Indian Democracy 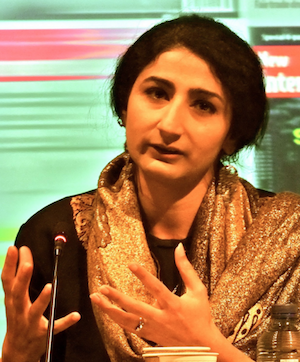 Every time people gather in any significant protest against the Indian state — which claims the territory of Kashmir in its entirety and holds on to two thirds of it by the force of nearly 700000 troops, making it the world’s most militarised zone — people are killed by the bullets of the security forces; and every time there is a funeral of those who protest and resent the Indian state, massive crowds gather to demonstrate. And so the cycle repeats itself. But is the world listening?

The jingoism of ‘India rising’, which has a great hold on the hearts and minds of the Indian middle classes and now increasingly pervades the discourse in the west too, has no space for human rights, or indeed, any sense of humanity. Masses of Indian public are fed the hypernationalist narratives recycled in the media which only repeat “Kashmir is an integral part of India”. They are utterly unable to comprehend the mechanics of an occupation which is carried out in the name of a ‘democracy’. 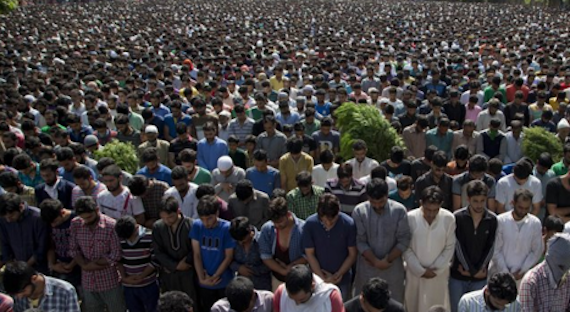 Democracy, however, looks very different in Kashmir, where opening fire on political protestors is not unusual, access to telecommunications is dependant on the whims of the authorities, there are daily curfews and emergency powers mean that armed forces are immune to prosecution. The mainstream political parties are seen as pro-Indian collaborators in most cases, while the ‘separatists’ who have a mass following boycott the elections. Democracy as a system under such circumstances does not represent the will of the people and has no purchase on popular sovereignty.

A few days ago, on July 8, when a militant commander and popular freedom fighter Burhan Wani was shot dead by the security forces, numerous Indians celebrated the success, while an overwhelmingly large number of Kashmiris mourned. They gathered in unprecedented numbers for his funeral, to express their grief and to protest and raise their voices against the Indian occupation, saying what they have been saying for decades now: “Go India, Go Back”, “What do we want? We want Freedom (Azadi)”. Sadly and predictably, they are shot at. Over a single weekend, until July 11, 30 people have been killed. There is a growing death toll, ambulances have been attacked, scores of Kashmiris have been blinded by pellet guns and hundreds are severely injured. Internet and mobile services have been shut down, entire cities are under siege (#KashmirSiege).

You would think that would at least make the news abroad. But, of course, “the world’s largest growing free-market democracy” (the official slogan of Brand India) has its advertisers abroad. India is not China. The Kashmiris who are killed are Muslims. And so the deafening silence overseas. It seems that a hellishly large number of lives need to be lost outside the west before the horrors of such atrocities come to the world’s attention. This is not the first time; in 2010, during a monstrous summer of killing, over a hundred unarmed Kashmiri youth were shot dead by the Indian state (the stone-pelting protests began when a minor playing cricket was killed by the security forces as they used excessive force against a demonstration) and the international community barely murmured. The people of Kashmir have, for decades now, continued to gather in mass public assemblies of protest to rage against the Indian occupation; with all its military might and news censorship, the Indian state only achieves short spells of uneasy silence.

The philosopher Judith Butler in her recent book “Notes toward a performative theory of assembly” writes about the way in which the gathered bodies of people in the public sphere is, before any utterance, itself a statement, an act of resistance: “The assembly is already speaking before it utters any words and its coming together is already an enactment of popular will”. Butler also writes “the ungrievable gather sometimes in public insurgencies of grief” – she means that those who are not seen as being worthy of mourning by the public, sometimes gather to mourn in public – making a funeral and a demonstration in some places look alike. In Kashmir, the funeral and the demonstration do not just look indistinguishable, but actually are necessary, continuous and the same. The funeral is an act of grief that folds into protest, and the demonstration is fired upon and results in funerals.

The hundreds of thousands of Kashmiris who gathered for the funeral of Burhan Wani, whom they saw as a freedom fighter and the Indian state saw as a terrorist, are speaking loud and clear by their presence in the public sphere at the risk of death and injury – ‘we do not want to be the disposable bodies for the performance of your ‘democracy’, you do not represent us, we want freedom’. And yet, unable to look past the aggressive super-nationalist anchors on their TV screens, Indians wonder – ‘how can the Kashmiris be so ungrateful for being included in the Great Indian Democracy, how can they mourn the death of a terrorist?’

In the contemporary world, a host of geographical, chromatist, and other identity markers differentiate between those who are seen as worthy of being mourned and those whose deaths are seen as ungrievable. The latter being the ‘Other’ – in today’s world, the refugees, the Iraqis, the Dalits, the Kashmiris (the list goes on). Recently, when I spoke about the ‘precarity and performativity of democracy in India and Kashmir’ at a UK university workshop, an academic from a progressive Indian university responded with a reflex that could perhaps best be characterised as methodological nationalism, saying that no one knew what the reality is in Kashmir.

No one knows? To paraphrase Arundhati Roy, there are no ‘voiceless’, just the deliberately silenced, or the preferably unheard. There is no dearth of critical texts (articles, books, films, music) on Kashmir. And yet, the India versus Pakistan, Hindu versus Muslim general canards have been repeated enough to almost become self-fulfilling prophecies.

Because, it is easier for the world to see Kashmir as a prize that two post-colonial ‘immature’ democracies can’t stop fighting over, and it is certainly easier for Indians to see it only as good Hindus being driven out by bad Muslims. Never mind the history, the accession, the subsequent machinations of the centre-state relations, the poisoning of Kashmir from within and without in the 1980s, the rigged elections, the crescendo of violence in the 1990s, the still in operation emergency powers including the Armed Forces Special Powers Act (AFSPA, which effectively gives the Indian armed forces immunity from prosecution for killings in Kashmir).

Excuse the imprecision of the brutal arithmetic, for the estimates vary, but as a result of the conflict in the last two and a half decades alone, even by conservative estimates, there have been over 70,000 deaths, 8000 enforced disappearances, mass rapes, executions, well documented instances of torture camps, 250,000 displaced, and the list of horrors continues. Kashmir is a territory that has been held by force by its neighbours against the will of the majority of the Kashmiris, and hence, both India and Pakistan most fear an indigenous freedom movement that is now firmly entrenched in Kashmiri soil. Burhan Wani was just one prominent example of this sentiment.

There are some in India who speak up for Kashmir and its claim to an Azadi (freedom). And they face consequences, ranging from vicious trolling to physical attacks. Earlier this year, university student leaders were arrested and assaulted in the court room for allegedly having chanted slogans of freedom for Kashmir on the anniversary of the execution of Afzal Guru, a Kashmiri man who was implicated in an attack on the Indian parliament in 2001 and hanged not because it met the required ‘rarest of the rare’ criterion, but on the basis of circumstantial evidence, and as the judge noted in his judgement, “to satisfy the collective conscience of the Indian nation”. Guru’s family was not informed and his body was buried in prison.

While the general mass of public opinion in India is obviously jingoistic (a popular rhyming slogan literally translates as ‘if you ask for milk, we will give you pudding; if you ask for Kashmir, we will tear you to bits’), even otherwise progressive voices (feminists, leftists) who speak of opposing racism, colonialism, militarism, occupation in Palestine, often stay silent on Kashmir. This is a cultivated ignorance which is a product of privilege of being able to afford not to know about something. A generation of Kashmiris have grown up in the shadow of guns, barbed wire, bunkers, torture, rapes, enforced disappearances, executions, violence, displacement, religious radicalisation, and most of this is near-completely blacked out from the general Indian consciousness (except for politically opportune and erratic co-religionist sympathy towards displaced and exiled Kashmiri Hindus, also known as KPs or Kashmiri Pandits).

Colonialism is not only a western prerogative, and anti-colonial freedom struggles can be the preserve of people of any religion. The struggle against India in Kashmir has gone through many stages, and evolved to a point where it is no longer able to be characterised in the familiar terms of being a ‘proxy war of Pakistan’, and is undeniably about self-determination, freedom and human rights.

On the other hand, the Indian stance on Kashmir has remained within the same ambit of bribery, collaborators, stooges, espionage, surveillance, repressive laws, violence, curfews and shutdowns. In fact, this position has even hardened as Modi-led BJP has made overtures towards Pakistan making common cause against Kashmiri freedom from either state.

In May 2016, the Government of India sought to introduce a Geospatial Information Regulation Bill 2016 which would make any representation of Kashmir as it is commonly known worldwide and as it actually exists (depiction of the Line of Control or LoC, as after a UN ceasefire in 1948) an offence punishable by 15 million dollars and 7 years in prison. Acccording to this wishful thinking, all of Kashmir, including that part of it which has been under the continuous control of Pakistan for decades is actually part of India. The deterrent effect of this was directed towards international firms, and sure enough, within two days Google altered its Indian maps of Kashmir to suit the dictates of India, never mind accuracy or reality. India sees Kashmir as an unpeopled place, as an existential territorial obsession.

And so, India’s unrequited love for Kashmir leaves Kashmiris dead, disappeared, tortured, injured, traumatised, displaced, raped, shot, censored. This unreciprocated and obssessive desire that India has for Kashmir can be understood in terms of the theorist Lauren Berlant’s phrasing of ‘cruel optimism’ in her theory of affect: “when something you desire is an obstacle to your flourishing”. Indian desperation to possess the territory of Kashmir in its entirety, even if it means sacrificing all Kashmiri, and many Indian, lives, is a blot on Indian democracy and has succeeded not merely in dominating Kashmiris but also in dehumanising Indians themselves. It is time the world knew and faced up to its hypocrisy in dealing with the Great Indian Democracy.

About Author: Nitasha Kaul (@NitashaKaul) is a Kashmiri novelist, poet and academic. She is an Assistant Professor of Politics and International Relations at the Centre for the Study of Democracy at the University of Westminster in London. Her work and publications are at www.nitashakaul.com.

Note: Above write-up was originally published by Open Democracy under title: “From funerals to freedom for Kashmir: undoing the Great Indian Democracy” by NITASHA KAUL at source URL: https://opendemocracy.net/openindia/nitasha-kaul/from-funerals-to-freedom-for-kashmir-undoing-great-indian-democracy.