Chicago: A US TV News Channel has apologised for labeling a Sikh tourist in Chicago as “terrorist” in closed caption. The ABC 7 News said that it was not an intentional mistake and the closed caption provider committed the mistake and joined the CC provider company in apologising to Manpreet Bal.

In a letter sent to Manpreet Bal ABC 7 News wrote: “It was a transcription error. Our captions are provided by the National Captioning Institute, based near Washington, DC. The captioning operators do not see a video feed of our newscasts”.

“Here’s how our captions are created: the captioning operator listens to an audio-only feed of our newscast. The operators then repeat what they hear into voice recognition software which translates that into the captions that appear atthe bottom ofour screen. In this case, the enunciation was not as clear as it needed to be, and the computer generated the wrong word. When the operator saw the error, she immediately corrected the captioning. That correction aired within seconds of the original mistake”, the letter reads further. 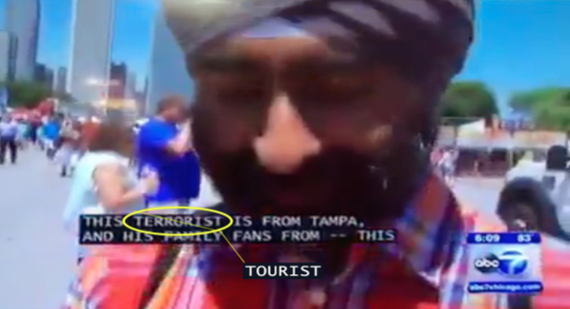 A screenshot with marking as provided by the Sikh Coalition

“I am forwarding to you via email a written apology from NCI that further explains the incident. We join them in apologizing for the error and for any misunderstanding or discomfort it may have created”, Jennifer L. Graves wrote on behalf of ABC 7 News.

“Last Wednesday, I was vacationing in Chicago with my family when we were filmed for a local television segment on ABC 7 News while at the Taste of Chicago”, said Manpreet Bal.

“When the segment aired later that evening, the closed caption that appeared with the story read “terrorist” instead of “tourist.” Although I didn’t see the story, thousands across Chicago did. Some of them even shared the clip on social media. I couldn’t bear the thought of telling my young children what happened because I didn’t want to ruin our vacation”, he added.

“People were confused, upset and disturbed. That’s when the Sikh Coalition intervened. Within minutes, the Sikh Coalition was in high-level discussions with the directors at ABC 7 News, figuring out why this horrible mistake happened and how it could be fixed. The next day, ABC 7 News and the caption transcription firm apologized for their mistake, and vowed to work with the Sikh Coalition to air a positive story about the Sikh American community in Chicago in the coming weeks”, added Manpreet.

While informing that the ABC 7 News has apologised for the mistake he said: “This immediate and remarkable result wasn’t accidental. The Sikh Coalition knew exactly who to contact at ABC 7 News because they had previously worked with the station and built a reputation of credibility and respect. The network knew that if they didn’t fix the problem, they would be held accountable”.

“My family and I are very grateful for this valuable work and the work that organizations like the Sikh Coalition do every day to positively educate Americans about the Sikh faith, community and culture. They analyzed the problem, fixed it and turned it into an opportunity for positive exposure about the Sikh community. They do this work not just in Chicago, but across the country”, he added.