Columbia, SC: As per the Sikh Coalition, [o]n July 21, 2016, Specialist Harpal Singh successfully graduated from Basic Combat Training at Fort Jackson in South Carolina. During the ceremony, he was honored and given the “Soldier of the Cycle” award for being one of the best soldiers in his company.

“Harpal’s graduation marks another milestone in our progress to end religious discrimination in the military,” said the Sikh Coalition’s Legal Director, Harsimran Kaur. “It was an honor to be with Harpal’s family and witness another Sikh soldier demonstrate his ability to serve with his articles of faith intact.”

Harpal is the first of the three Sikh soldiers who were granted religious accommodations in April 2016 to pass Basic Combat Training. Specialist Kanwar Singh and Private Arjan Singh Ghotra are scheduled to graduate in August and September. These accommodations were made after the Sikh Coalition, McDermott Will & Emery and The Becket Fund for Religious Liberty filed a lawsuit against the U.S. Department of Defense and the U.S. Army earlier this year. 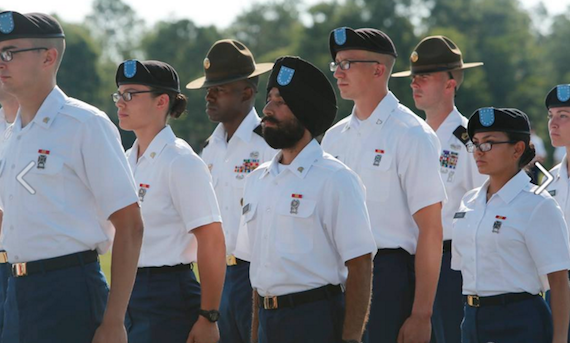 Separately, another Sikh Coalition client, Jaspreet Singh Gill, was granted a religious accommodation on July 14, 2016. Jaspreet will join the ROTC at Lafayette College in Pennsylvania as he now begins to pursue his dreams of serving our nation. Gill becomes the fifth Sikh soldier in 2016 to be granted a religious accommodation to serve in the U.S. Army.

“I am delighted that Cadet Gill, a native of Yuba City in my congressional district, has been granted a religious accommodation and will be allowed to serve our great nation in uniform, “ said Congressman John Garamendi. “As a Member of Congress who has worked closely with the Sikh American community, I am all too aware of the roadblocks that Sikhs continue to face in order to serve while retaining their articles of faith. I urge the Department of Defense to end the arduous, case-by-case accommodation process and issue a new standing policy.”

“The Sikh Coalition is pleased to witness the significant progress of our military campaign. In 2016, we have almost doubled the number of Sikhs granted accommodations to serve with their articles of faith than in the previous 35 years combined. However, the blanket policy prohibiting Sikhs from serving with their articles of faith remains and so the broader battle to end the policy of religious discrimination by our nation’s largest employer continues”, reads the statement.