Chandigarh: Aam Aadmi Party (AAP) today accused the Badal Government for losing faith and confidence of peasantry by its failure to implement the much hyped Prime Minister’s Crop Insurance Scheme in Punjab.

In a joint statement on Tuesday, AAP’s Spokesman Sukhpal Singh Khaira and Head of Manifesto Committee of the party Kanwar Sandhu stated that by scrapping the “Pradhan Mantri Fasal Bima Yojna”, Chief Minister Parkash Singh Badal cannot shred of his responsibility towards farmers, who were being forced to take the extreme step of suicides due to acute financial debt. 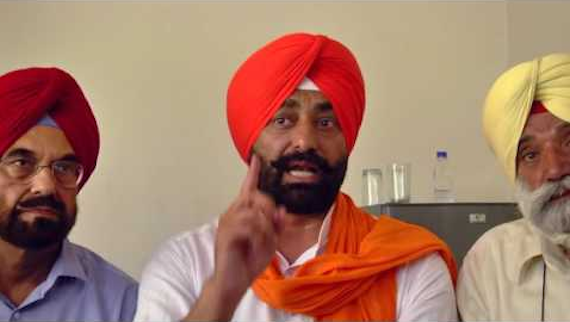 “If the existing Scheme was not conducive for Punjab’s farmers then why SAD, which claims to be an oldest and strongest ally in NDA, allowed to get it approved by Prime Minister Narindra Modi? Was SAD’s representative in Union Cabinet Harsimrat Kaur Badal was sleeping, when the scheme was approved? Was it not must for SAD to force amendments in the existing scheme to get it made conducive for Punjab?”, AAP leaders quipped.

If Badals would have been serious to protect the interests of Punjab farmers, they could have warned the NDA to snap its political ties with BJP and after no heed was given to their grievances, they should have opted out of union government to perform the role of opposition, Sukhpal Khaira and Kanwar Sandhu vowed.

Badal owes an explanation to farmers that after rejecting the Centre’s Crop Insurance Scheme, what he has planned for the implementation of better scheme in Punjab, said AAP leader while suggesting that five times Chief Minister Parkash Singh Badal must take lessons from Delhi Chief Minister Arvind Kejriwal, who had extended compensation of Rs 20 thousand per acre to Delhi’s farmers, when their crop was damaged due to natural calamity.