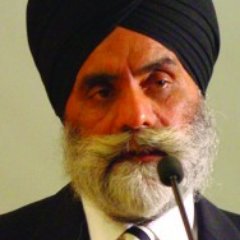 Since the 9/11 attacks in New York, visible minorities have experienced a rise in racial harassment and hate crimes. There have, for example, been numerous incidences of harm to Sikh lives, properties and institutions – in the absence of any monitoring data, an aggregation of various media reports suggests that more than twenty 20 lives have been lost with 100s of incidences of harassment and vandalism. This recent upsurge in hate crimes can only be attributed to Islamaphobic reactions to the horrific attacks and provocative activities carried out in Europe, the USA, Australia and elsewhere. The current economic stagnation, unemployment, migration and social distress in some areas of the West are also being exploited by far right groups to victimise people of visible minorities who wear Asian or Arabic attire.

Many Asian, Black and Minority Ethnic (ABME) people who have a long experience of living, learning and working in Britain, will remember terms of abuse from the 1950s-60s-70s, including ‘pakis’, ‘coolies’, ‘snake charmers’, ‘niggers’, ‘ranga tangs’, ‘monkeys’ and so on. The source of such imagery was materials from the colonial era. After the 1979 Iranian revolution, the media also began to popularise images of the new Iranian leadership who wore rounded turbans and kept full beards. Thus in the 1980s a racist taunt for visible Sikhs became ‘Khomeinis’; in the 1990s Sikhs were called ‘Talebans’, in the 2000s ‘Bin Ladens’, and from 2010 onwards the popular stereotype of ‘ISIS’.

Whether individual acts or instigated by ultra-nationalists/fascists, racist hate crimes are largely a reaction to aforesaid horrific activities. However, there can never be any justification in such stereotyping, harassment or attacks on innocent people because of the activities of a misguided few. The victims, their families and communities of terror and racist attacks, suffer a similar sense of pain, loss and tragic life changing experience.

Sikhs worldwide are not easily intimidated by hate crimes, because of their self-confidence and belief that people of other races, religions and backgrounds understand their identity and appreciate them for who and what they are – hard working and faithful members of the societies they live in. They are helpful to other citizens and practice a good charitable community life. Sikhs, of course, are proud of their identity, attire and self-image across the world. Younger generations of Sikhs are emerging as a new global community of professionals, educationalists and entrepreneurs, who are capable of articulating and tackling identity challenges.

Sikhs appreciate an increasing recognition of their identity in the West. The racist hate crimes have been repeatedly condemned by the political leadership and establishment and fortunately, they are isolated incidents perpetrated by misguided individuals or groups. However, activities of ultra-nationalists and far right groups in many places are on the rise as protest marches, firebrand speeches and occasional spates of racist attacks have shown. Far right voices have also made some electoral gains and there are alarming signs of its rise. It is imperative that all racist crimes are reported for investigation by law enforcement agencies to identify the perpetrators and bring them to justice. As yet however there is no systematic public monitoring of race hate crimes against visible Sikhs or other minorities – this should be a matter of public concern.

In Britain on the whole, race and community relations have sustained well despite occasional setbacks. The state education system has made limited contribution in broadening teachers’ and learners’ horizons in appreciating the development of post WW2 multi-faith, multicultural and multi-racial society. There is little provision in the school curriculum covering post war social changes such as the history of migration and settlement of ABME communities. The recognition of their cultures and sacrifices of their parents or grandparents in WW1 and 2, and their hard work in industry and services in developing the post-war social and economic life, remains scant. Thus successive generations had limited opportunities to develop any collective awareness of the new diversity and values affecting the society.

British born and raised ABME generations have largely formed their religious and cultural identities in isolation within their own family and community settings. Any education and training involving tackling racial prejudice, discrimination, inequality and social injustice have remained in the margins of state education provision. Contemporary segmentation of the media and its social impact are not conducive to enhancing social integration. It needs a focused policy and strategic support mechanism. Hence ABME and White communities have yet to join together and hold popular marches in London, Paris or New York condemning the political violence and attacks arising from abuse of religions. We yet do not appear confident in analysing and developing a shared understanding and approach to these challenges.

In the UK, USA and Canada, where Sikhs have long settled, the nature and pattern of their participation in politics, lobbying and civil activities vary but is on the rise. In Canada Sikhs have moved into frontline of politics, whilst in the USA some organisations have made inroads into the White House. In the UK, however Sikhs have only two members in the House of Lords and have not been able to get anyone elected to the House of Commons – partly because of their preoccupation with the homeland politics. Some Sikh activists born and raised in Britain and from professional backgrounds, are raising their voices through lobbying mechanisms. The Sikh community in Britain need a constitutionally organised open, democratic, transparent and inclusive channel for their representation. Moreover, a more pragmatic participation in mainstream politics will help in dealing with the threats of racist hate crimes. Older Sikh political groups need to be realistic and proportionate in their activities. They need to make more friends and fewer enemies. The Indian High Commissions and Embassies in conjunction with Indian community organisations and competent authorities need to be more proactive in safeguarding and protecting the interests of people of Indian origins. The Sikh community can be more successful by promoting and consolidating their identity within the mainstream of democratic, secular, plural and diverse social space by building alliances with others.
( Dr. S S Sangha OBE FRSA is a former Principal & Chief Executive of a leading UK GFE College, he has been writing and publishing on current affairs since the late 1960s. Twitter: @SanghaDr . Views expressed in above write-up are personal.)