Alleged cash sting was a conspiracy, Ready for CBI inquiry, Party runs of contribution of supporters:

Maintaining that he has been framed by some of his party companions in alleged cash-pocket sting operation, Sucha Singh Chhotepur said that he had been running party operations on funds donated by AAP volunteers and his supporters. He said that the Central leadership did not form any state committee and there was no party fund account.

He said that he was ready for CBI inquiry on funds issue. “All funds I received were spent on party activities”, he added. 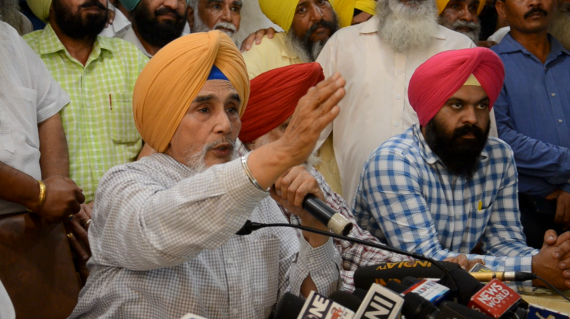 “I have worked day and night for last two and half years to root the party in Punjab and everything was made possible by financial contribution by the party supporters. The Central leadership did not allot even a single penny for party activities in Punjab”, claimed Sucha Singh Chhotepur.

Central leaders did not like me for raising issues during meetings:

He said that the Central leadership of AAP had concentrated all powers into it’s own hands and Durgesh Pathak made super head of the AAP unit. Chhotepur said that he was a namesake convenor so far as the issue of powers was concerned.

It seems AAP has conspired with Govt. to field week candidates:

He said that the party’s Central leadership did not listen to him while allotting party tickets in Punjab. I had no say in allotment of party tickets.

“It seems that the party has conspired with the Punjab government to give tickets to week candidates to befit Badals” he alleged.

Arvind Kejriwal’s comments about Sikhs made me to shiver:

Chhotepur also levelled serious allegations against AAP convenor Arvind Kejriwal. He said that Arvind Kejriwal’s comment about Sikhi had made him to shiver. He said that he had told the media that he had not seen the title page of Youth Manifesto released by the Aam Aadmi Party in Amritsar. He said that Kejriwal was angry over this issue but he told Kejirwal that firstly, he had not seen the title page and secondly that he would have been got excommunicated from Sikhi by opponent for allowing wilful violation of Sikh tenets. Chhotepur maintained that Arvind Kejriwal said that he should not have bothered about being excommunicated from the Sikhi.

Central leadership even rejected reconciliation bids by some Punjab leaders:

Will not leave party; Next move to be announced only if ousted:

Replying to queries posed by journalists, Sucha Singh Chhotepur said that he would not quit the Aam Aadmi Party (AAP). “Why would I quit a party for which I have worked so hard”, he added.

On being asked that what would be his move if he is ousted from the party, Chhotepur said that he would announce his next move only after suspected expulsion from AAP.