New York, NY: The Sikh Coalition has launched The Sikh Project on September 17. As per the Sikh Coalition [t]he groundbreaking free photography exhibition featuring portraits of Sikh American men and women provides a window into the challenges and resilience of the Sikhs in the United States of America (USA) 15 years after 9/11.

“During this period of heightened divisive rhetoric and hate backlash directed at so many minority communities, we felt that there was no time better than the present to highlight the beauty of the Sikh faith, the strength of our collective spirit and to do so in a way that further educates the broader American public,” said the Sikh Coalition’s Executive Director, Sapreet Kaur.

The project, originally conceived by British photographers, Amit and Naroop, first launched to critical acclaim in London in 2014. The original exhibition featured British Sikh men and was called the Singh Project. 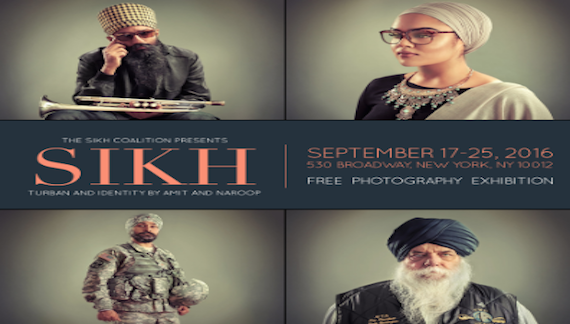 “We are excited to bring the new Sikh Project to America and there is no better partner than the Sikh Coalition,” said Amit and Naroop. “We believe that art can play such a valuable role in education, and this exhibition will go a long way to further the American understanding of the Sikh faith, community and traditions.”

In addition to the thousands who will visit the exhibition in person, media coverage of the Sikh Project has already reached millions more as the Sikh Coalition uses the project to further educate the American public through the news media.

“Whether you live in New York or not, we still need your support to make the next ten days as successful as possible! Join the event page on Facebook and share the exhibition and news coverage with your classmates, colleagues and neighbors. Use #SikhProject and publicize the exhibition. We need your support!”, a newsletter by the Sikh Coalition reads.

WHEN: Saturday, September 17 – Sunday, September 25. The exhibition opens TODAY, from 10am-8pm EST with extended hours on the weekends.

WHERE: 530 Broadway, New York, New York 10012. The space is easily accessible by train and subway with the nearest stations being Bleecker Street/Broadway–Lafayette Street and Spring Street. Parking is also available with multiple parking garages in the vicinity.

WHAT: FREE Sikh art exhibition that is open to the general public with the goal of educating Americans about the Sikh community!