Richmond, CA: The Sikh Coalition reportedly sent a letter on Oct. 07 to the Richmond Police Department and the Contra Costa County District Attorney’s Office on behalf of Maan Singh Khalsa. As per reports Maan Singh Khalsa was brutally attacked and his turban was violently knocked off and hair cut on September 25, 2016.

The letter urges authorities to conduct a hate crime investigation and prosecution in the case of the assault that resulted in stitches, a swollen black eye, dental injuries which will require surgeries, and an infected finger which may require an amputation.

“The attackers caused physical injuries and deep harm when they targeted my Sikh faith,” said Mr. Khalsa. “I urge a thorough investigation so we can address the tide of violence and bigotry in this country.” 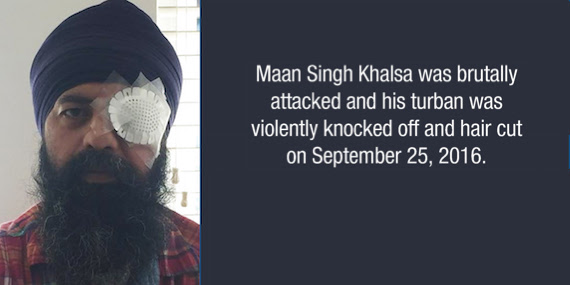 Maan Singh Khalsa, a father, IT specialist, and caregiver for the elderly, was driving on the night of September 25th when a man in a truck threw a beer can at his car wholly unprovoked. At an intersection further up the road, three men got out of the truck and assaulted Mr. Khalsa through his open car window, knocking off his Sikh turban and hitting his face repeatedly. They shouted, “Cut his fu****g hair,” pulled his head out of the window, and cut a fistful of his religiously-mandated unshorn hair with a knife. Maan Singh Khalsa sustained injuries to his fingers, hands, eye, and teeth.

“We urge authorities to fully investigate this hateful attack on Mr. Khalsa and his Sikh identity,” said Sikh Coalition Legal Director, Harsimran Kaur. “The purpose of a hate crime investigation and prosecution is to ensure that our government and communities accurately account for the problem of bias in our society.”

In the 15 years that have followed 9/11, Sikhs remain hundreds of times more likely to be targeted in cases of profiling, bigotry, and backlash than the average American. Sikhism, the fifth largest religion in the world, has been an integral part of the American fabric for over 125 years.

“We need to acknowledge hatred so that we commit the resources necessary to address bias-based violence,” said Harsimran Kaur.