Bangalore: Events spanning over three days were held at Gurudwara Singh Sabha, Ulsoor, Bangalore by various Sikh youth groups to commemorate and remember those who lost their lives during Sikh Genocide of 1984 and laid their lives during the struggle thereafter.

The events included Keertan Program, Seminars, discussions etc. A documentary movie on Shaheed Bhai Jaswant Singh Khalra was shown to the Sangat and youth was urged to take inspiration from this great soul. Sessions were held to explain the post 1984 history of Sikhs and the current context of Sikh Struggle.

A thorough session was held explaining the lives and personalities of great GurSikhs of Sikh struggle for freedom and the reasons for decline were deliberated. Sangat was made aware of the various accounts of atrocities committed by the government and state machinery of that time. 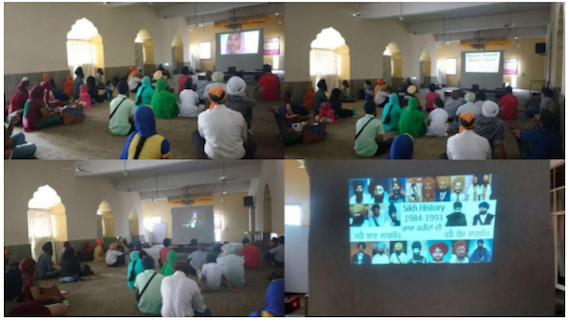 Prevalent situation in the Panth was also discussed and analyzed and Sikh Youth was urged to understand and expose the current popular narrative given by government agencies & other “Hindu-nationalist” institutions and was also appealed to work to bring the debate and discussions for sovereignty of Khalsa Panth to the top priority and not to indulge in any lesser debates around other internal issues of Panth, which of course can be sorted out later.

The Events were concluded with an extended Q&A session with Sikh Youth and with a resolve to strengthen the bond within various Sikh groups by working towards a “higher goal” and to have a policy of “No Prejudice” and “No mudslinging” towards fellow Sikhs on other internal issues.

The event got support and encouragement from Gurudwara Management who appreciated the efforts of Sikh youth and asked them to arrange more such programs in future.