Chandigarh: Aam Aadmi Party leader and Supreme Court lawyer, H.S. Phoolka on Thursday demanded immediate arrest of Congress leaders Jagdish Tytler and Sajjan Kumar for their role in 1984 genocide. Addressing the media at Chandigarh Advo. Phoolka said that Jagdish Tytler was summoned and investigated by CBI for 4 hours in different cases. Sajjan Kumar was also summoned in the case related to throwing victim Gurcharan Singh in a burning truck in November 1984. He said that the culprits are being saved by political parties for their vested interests.

H S Phoolka said that although Gurcharan Singh escaped alive in the incident but he was unable to walk and was bedridden since 1984 till his death in 2009. He complained to police for many times but no case was registered on his statement due to the political pressure on the Police. The case in this regard was registered on August 21, 1999 on the directions of court. Till then the SIT has not initiated the investigation. 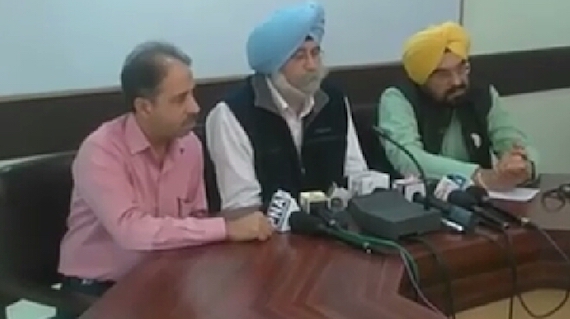 AAP leader said that a case was registered against Tytler for torching Gurudwara Pulvangas Sahib and killing Gurcharan Singh, Santokh Singh and Badal Singh but it was closed by congress government in 2007 and 2009 but was reopened after orders of Hon’ble court both times. He said that Modi government in which Harsimrat Kaur Badal is a minister again filed a closer report in the case and gave clean chit but again on December 4, 2015 court directed government to reopen the case. The court also directed CBI to file report of case in 3 months but even after passing 1 year CBI is unable to file any report. Phoolka said that it shows that not only Congress but BJP and SAD are also saving Tytler and Sajjan Kumar.

Phoolka said that Aam Aadmi Party government in Delhi formed SIT to investigate cases of 1984 genocide but the government was suspended after 49 days. Again after formation of AAP government in Delhi, Kejriwal as per his promise was about to form SIT again but Modi led centre government formed it on their own making Delhi government illegible to form SIT. He said that the SIT could not start its work so it is demanded that the rights of forming SIT be given to Delhi government for further investigation. Phoolka also accused Akali Dal for using issue of 1984 genocide for their political gains but did nothing to provide justice to the victim families.

Kanwar Sandhu said that centre and Badal government did not take action against Sajjan Kumar and Jagdish Tytler even after having so many proofs against him. On the other hand AAP MLA from Delhi was arrested on the statement of an accused in desecration case of Quran Sharif at Malerkotla. Gulshan Chabra said that as the territory of incidence falls under Delhi government so the power to investigate cases be given to Delhi Government. He said that Congress, BJP and SAD leaders including Amrinder Singh are busy giving clean chits to the accused.