Amritsar: A young Sikh in United States of America (USA), Balmeet Singh, who dared to stood up against a hatemonger, was awarded with the ‘Young Hero’ award in the US.

As reported by local media on September 30 Balmeet Singh was approached by an angry stranger, later identified as David Hook, outside a restaurant who threw some drink on his face and threatened him with his life. 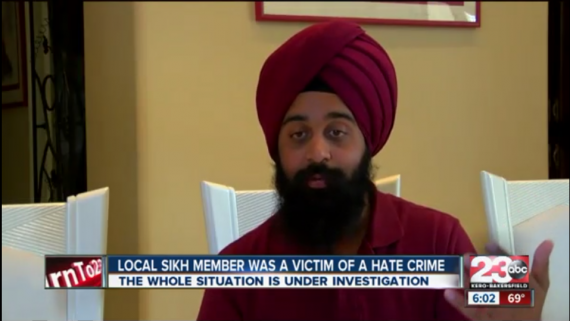 Balmeet Singh answered back by yelling at him following which the suspect started moving towards the parking lot. He followed the accused to get his description and note the licence plate number on his vehicle. He had grown up in Bakersfield, Kern County.

Inderpreet Singh of American Sikh Council (ASC) reportedly told Times of India (TOI) on Monday that Balmeet Singh was given the Young Sikh Hero award at Bakersfield, California, by mayor Harvey Hall. He said, “Because the 30-year-old realtor and health clinic administrator had a beard and the traditional turban worn by Sikh men, Balmeet was first bewildered and then felt afraid that he maybe assaulted.

The alleged attacker shouted that Balmeet was a threat to the country and hurled racial abuse at him before running away in a pick-up truck. Inderpreet Singh said the man was later arrested and charged with hate crime but not before the community put intense pressure on police to take appropriate action, said the media reports.

Furthermore talking to the media Inderpreet Singh added that Balmeet Singh also focused on the issue of bystanders not wanting to take action when they see a crime being committed, especially if the victim is of a minority community. He said, “Balmeet Singh had been speaking out at several events for nearly two months, up and down California.”