WashingtonDC: As per the report emanating from the local media , the U.S. Army issued updated rules governing religious liberty that significantly remove the hurdles for Sikhs who seek to serve in the armed forces of their country with their Kakars (religious articles of faith) intact. Sikh Coalition a US based Sikh body has been campaigning from the last eight years to end the U.S. military’s presumptive ban on the service of observant Sikhs, the Army’s new rules represent a historic step forward for Sikhs  seeking to serve in the country’s armed forces. 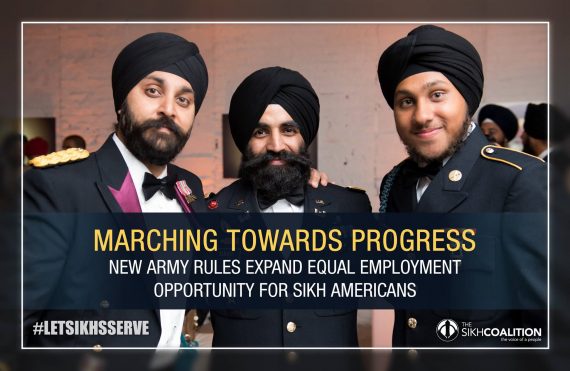 The new rules, which were signed by the Secretary of the Army Eric Fanning, eliminate bureaucratic hurdles that previously discriminated against Sikhs. Accommodation requests can now be approved at the brigade-level instead of going all the way to the Secretary of the Army. Once an approval occurs under the new rules, the religious accommodation is enduring and applies to most positions within the U.S. Army. The new Army policy does not apply to the other branches of the U.S. military.

As per the new amendment the Brigade commanders will have to grant religious accommodations for unshorn beards, unshorn hair & Dastaar unless the requestor’s religious belief is not sincere or the Army identifies a specific, concrete hazard. Accommodations must be granted across all duty positions except in certain limited circumstances. The Army intends to conduct additional testing for the use of protective equipment by bearded soldiers.