London: (Press Release): Sikhs across the globe last week celebrated the 350th Parkash Utsav of the Tenth Sikh Guru, Guru Gobind Singh Ji. The Prime Minister, Theresa May, leader of the Opposition, Jeremy Corbyn and many other UK politicians shared personal messages regarding Guru Gobind Singh Ji’s greatest achievements. One of his key messages was one of equality, especially with regards to gender and appreciation of diversity.

The Sikh Network decided on the concept of celebrating Guru Gobind Singh Ji’s message on gender equality and diversity by collating and publishing details of 350 Sikh women in the month of January. The first five days were dedicated to Sikh women in history that set the tone for the #350sikhwomen social media campaign.
One of the Sikh Network team spearheading the campaign said:

“I have learnt so much from researching the contribution of Sikh women in history. From the fantastic feedback we have had on social media this has been a real eye opener for many Sikhs and non-Sikhs and both men and women across the globe.”

“There is a huge demand to learn more and we think this is the start of something special. The Sikh Network are developing plans to continue with the educational part of this campaign of perpetually celebrating the contribution of Sikh women and the message of our Gurus.”

Other categories will include Sikh women in the UK in media and entertainment; education; business and the professions; armed forces and the police; sport; music and arts; human rights and public services. This is expected to take the number recognised to around 250. The current plan is the remaining 100 Sikh women will be those that have excelled in similar categories in other countries. 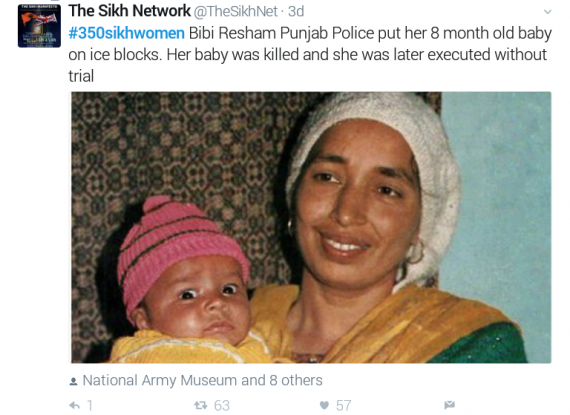 Another key message of Guru Gobind Singh Ji was one of being proud of ones Sikh identity and being prepared to stand out and stand up for those less fortunate and champion basic human rights and not be frightened of discrimination as the Gurus taught us to be different.

Jas Singh founder of the Sikh Network said: “We are finding the campaign at the same time as the 350th Parkash Utsav of the Tenth Sikh Guru, Guru Gobind Singh Ji is making people reflect on what the Guru gave us and the sacrifices he and his family made for mankind.”

“The sacrifices made are intrinsically linked to the right to practice ones faith and the importance of the Sikh identity in terms of the names of ‘Kaur’ and ‘Singh’ given to us by Guru Gobind Singh Ji as well as the significance of the visible identity.”

“We want to use this opportunity for Sikhs and non-Sikhs to appreciate all Sikhs need to be ‘champions of human rights’ and value the visible Sikh identity so it is not seen as an obstacle, but something to be proud of in making progress to the highest levels in all fields.”

The Sikh Network will be sharing plans on extending the #350sikhwomen campaign at the end of January.