Chandigarh: Vice President of the All India Congress Committee (AICC) Rahul Gandhi today while addressing an election rally in Majitha announced Punjab Congress chief Captain Amrinder Singh as official Chief Minister candidate for the forthcoming state assembly election, Rahul Gandhi’s election tour is focused on a takedown of the Badals, who rule Punjab as the head of  Badal Dal-BJP government.

During his rally the congress vice president reportedly said that”There is a cut for the Badal family in everything in the state. Punjab pays a Badal tax.” He will be visiting all the Badal citadels, including Lambi, Chief Minister Prakash Singh Badal’s constituency and Jalalabad, his son and deputy Sukhbir Badal’s seat. 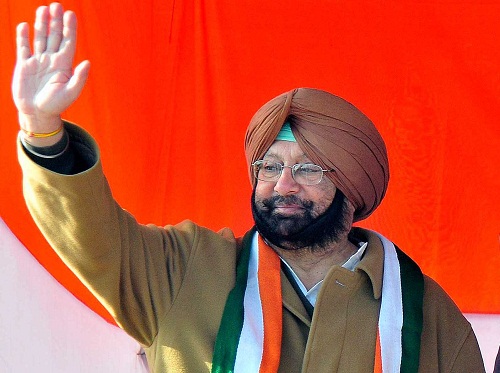 Earlier, Capt Amarinder Singh has challenged the chief minister in Lambi. While Captain has unofficially been seen as the Congress’ choice for Chief Minister should the party come to power in Punjab, there was speculation since the entry into the party of the very popular Navjot Sidhu earlier this month, on whether the position could in fact be open.

“We will have to look for answers to questions like who is responsible for the drug menace and who is to be punished for this. I promise you, if the Congress comes to power in Punjab, we will make a law against this menace,” claimed Rahul Gandhi in its address.