Chandigarh: The Indian government is becoming ever apprehensive due t0 increased coordination between Sikh and Kashmiri groups, particularly in organising  protests in Western countries. Media reports indicate that the Indian government is ‘concerned’ about this joint activism of diaspora sections of two struggling nations of the sub-continent.

While such protests have been staged in the recent past in London and New York, this “new trend” has become evident in the Greater Toronto Area, said a media report while quoting an anonymous official.

The latest joint protest was at the venue for the celebration of India’s Republic Day in Brampton, a suburb of Toronto. The groups participating in that protest were the Shiromani Akali Dal (Amritsar), Canada, United Front of Sikhs and Jammu Kashmir Diaspora Alliance.

Last year, these groups took out a march that  highlighted the killing of Kashmiri militant leader Burhan Wani.

As reported by the media the groups were sloganeering against the injustice meet out to their fellow brethren in the Indian Sub continent, in the downtown area of Toronto, across the street from an event to mark Independence Day, the organisers pointed to what they called the “murder of the liberation leader of Maqbooza (occupied) Kashmir Burhan Muzaffar Wani”. 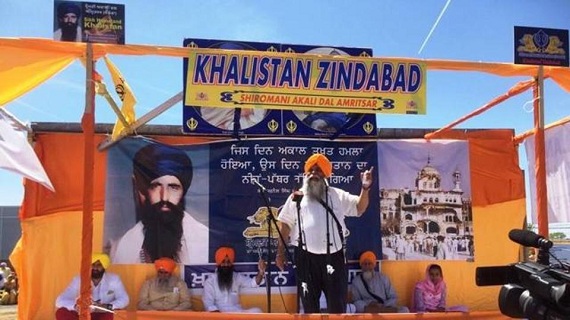 A view of Pro Sikh Event in Toronto..

Another protest as reported by the media sources was held in front of the Indian consulate in Toronto to “raise concern over Indian forces committing genocide and violating human rights  of the Kashmiri people in Indian occupied Kashmir” and the announcement for that had described Burhan Wani as a “freedom fighter”. The group, Friend of Kashmir, had joined that protest.

With reference to a report published by Hindustan Times (HT), a group with a similar name organised a Kashmir Black Day event at the Pakistani consulate in Toronto in November. Among those in attendance was Habib Yousafzai of the Jammu Kashmir Diaspora Alliance.

However, that had been intermittent and appears to have escalated in recent years.

While talking to the English vernacular Habib Yousafzai reportedly said that “They (Sikhs) have their own grievances; they don’t want to stay with India. We have our own grievances, we have a very known case.”