Amritsar: The probe committee set up by the Shiromani Gurudwara Parbandhak Committee SGPC to investigate into the controversial convention that was jointly organised  by Dera Sauda Sirsa (DSS) and Shiromani Akali Dal (Badal) just days before (on 1st February) the Punjab state assembly election  in which the members of the Dera members had pledged their support to the Badal-BJP candidates has submitted its report to the SGPC Jathedar. 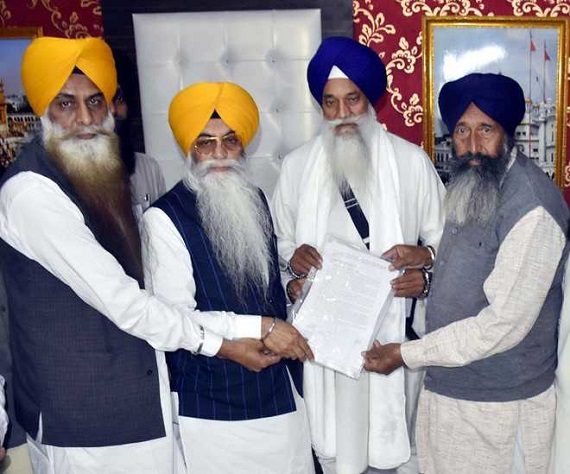 The three member SGPC panel, which has been entrusted with the task of scrutinizing the participation of Badal Dal leaders in the Dera Sirsa prior to Assembly elections today hand over to Giani Gurbachan Singh (2nd to right)in Amritsar on Monday.(The Tribune Photo)

After receiving the report in a sealed cover, Gurbachan Singh said action on the report would be considered in the next meeting of the Takht chiefs after Hola Mohalla.

It pertinent to note here, Hola Mohalla is on March 12 and on March 11 the Assembly results will be declared.

“It will take two-three days to go through the report, which includes the replies of several leaders,” he added.

It was on 6th February that as damage control mode for the Badals Giani Gurbachan Singh had directed the SGPC to probe the matter. The latter had constituted a three-member panel comprising SGPC senior vice-president Baldev Singh Kaimpur, general secretary Amarjit Singh Chawla and executive committee member Gurcharan Singh Garewal.

Moreover, on 12th February the probe panel had asked the SGPC president Prof Kirpal Singh Badungarh to extend the deadline date for submission of the findings of the report till March 7th 2017.

While addressing the media Gurcharan Singh Garewal maintained that report was based on video clips, photos, social media posts and news clippings. “The deadline to submit the report was March 7, but we did it a day in advance. The Party leaders, irrespective of their party affiliation, were held guilty of violating the Hukamnama of Shri Akal Takht Sahib by approaching the Sirsa dera before the Assembly elections.”

On January 28, several Badal Dal leaders had made a beeline to the Dera to woo its members. Some had reportedly announced to facilitate the organisation of Dera congregations in Punjab, if voted to power.

It is notable that Dera head Gurmeet Ram Raheem had organized a function in Salabatpura (District Bathinda) in 2007 where he personified himself as Tenth Sikh Guru, Guru Gobind Singh Ji. He attempted to dishonour the Sikh traditions, history and ceremony of Amrit Sanchar. Personification of Sikh Gurus is strictly prohibited in Sikh religion. In May 20o7 the Akal Takht had issued a Hukumnama against Dera Sirsa chief which also sought bar on Dera’s activities.

It is further notably that the controversial dera head is facing many serious criminal charges, including murder and rape charges in CBI courts.

Furthermore, its is interesting to note that in September 2015 the ruling Shiromani Akali Dal (Badal) had attempted to get Dera Chief pardoned form the Akal Takht Sahib and SGPC appointed Jathedars had issued a pardon letter, but it was later withdrawn in wake of strong resentment form the Sikh Sangat.

SAD (Badal) leaders held a joint conference with Dera’s political wing on February 02, 2017 at Bathinda to announce their mutual understanding. Dera Sirsa extended its support to SAD (Badal) for Punjab state assembly elections, polling for which was held on Feb. 04 and in return SAD (Badal) declared to facilitate Dera chief’s entry in Punjab. Notably, Dera Sirsa chief has not entered Punjab since 2007 controversy. There is sudden rise in Dera’s activity and the resultant clashes between Dera followers and the Sikh sangat since the Bathinda conference.