“The recent attacks in Uttar Pradesh show how black people in India – particularly African students – continue to face racist discrimination and violence. Many of those injured were targeted merely because of the colour of their skin. These are hate crimes, and authorities need to ensure that those responsible are punished,” said Makepeace Sitlhou, Campaigner at Amnesty International India.

Several black African students have been attacked in a series of hate crimes in Greater Noida over the last three days. On Wednesday, a Kenyan woman was pulled out of a taxicab and beaten in Greater Noida. On 27 March, four Nigerian men were beaten up by locals holding a protest march demanding justice for a 17-year-old who had died two days earlier from a suspected drug overdose. The boy’s family had accused their five Nigerian neighbors of murder and demanded their arrest. The men were arrested, and later released due to lack of evidence. 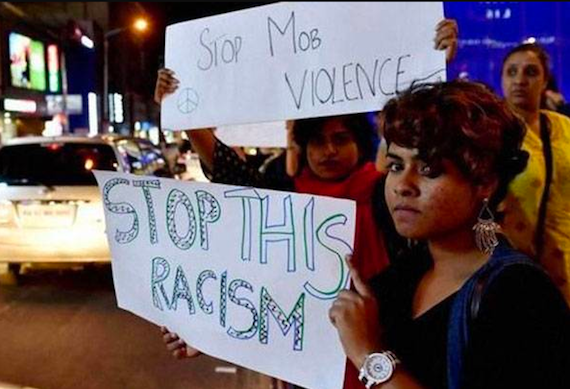 Video footage posted online by the Association of African Students in India shows two other Nigerian students being beaten – including with metal chairs and dustbins – by a mob inside a mall in Greater Noida on 27 March. One of the students, Enduranca Amalawa, told journalists, “We kept crying for help, but no one came, not even the security marshals. I was running but they followed me and attacked me.”

The police in Noida have registered a First Information Report against nine people on charges including attempt to murder in relation to the attack at the protest. Sujata Singh, Superintendent of Police, Greater Noida, told Amnesty International India, “We have increased patrolling and we will be deploying 400 more police personnel to ensure the safety of students from the African community.”

However black students in the area told Amnesty International India that they continue to live in fear. Samuel Jack, the president of Association of African Students in India, said, “We are all scared to leave our homes. We have issued an advisory telling all students from the African community to remain in their homes. We can’t attend our classes because we are scared that we will be beaten up.”

“Living in India must not become a life-threatening issue for black people. The police must not overlook the discriminatory elements of these attacks. Racism can end only if authorities first acknowledge and document its existence. The Uttar Pradesh government and other state governments must thoroughly investigate all reports of hate crimes, and protect the rights of black students,” said Makepeace Sitlhou.