Amritsar: As per media reports, the SGPC appointed Jathedars have let off Shiromani Akali Dal (Badal) patron Parkash Singh Badal and SAD (Badal) chief Sukhbir Badal in their so-called action against those Sikh politicians who had approached Dera Sauda Sirsa for support in recently held assembly elections in Punjab.

“There was no discussion on the role of the Badals in the meeting (of SGPC appointed Jathedars)”, The Indian Express quotes Giani Gurmukh Singh.

He also maintained that he was not shown the report submitted by SGPC and only the names of politicians who were summoned before SGPC appointed Jathedars were read out. 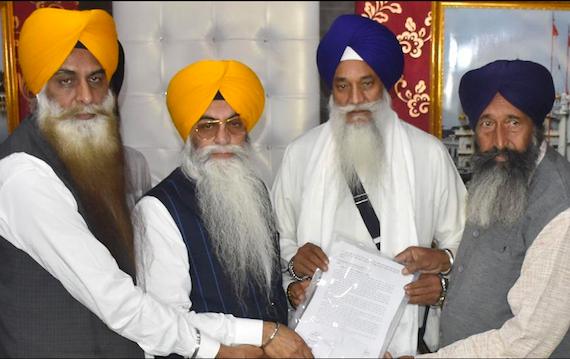 The Indian Express notes that: “The three-member SGPC committee which prepared the report has not found any involvement of Sukhbir badal, who is the president of SAD (Badal), or of former chief minister Parkash Singh Badal”.

The three committee members who prepared the report — Baldev Singh, Amarjit Singh Chawla and Gurcharan Singh Grewal — are all from the Badal Dal.

“We were working in a limited sphere. We were asked to find out the leaders who physically approached Dera. We didn’t find even any representative of Sukhbir Singh Badal and Parlcash Singh Badal approaching Dera for seeking votes on their behalf,” IE quotes Gurcharan Singh Grewal.

As per IE when asked if Sukhbir Badal was morally responsible for deeds of his partymen, Gurcharan Singh Garewal said,”It has to be decided by the Akal Takht. We have submitted what was under our realm. We cannot fix responsibility, only AkalTakht can.

On the other hand SPGC appointed jathedar Gaini Gurbachan Singh said,”We have to take action only according to report submitted by SGPC”.