During their cross-examination before Judicial Magistrate (First Class) Jagmeet Singh, the arrested students claimed that they were beaten up with belts and sticks, punched, abused and caste-based and obscene remarks were passed against them in the lock-up by the police. Several students also alleged that their medical examination was a mere formality, reads a quote in an English vernacular. 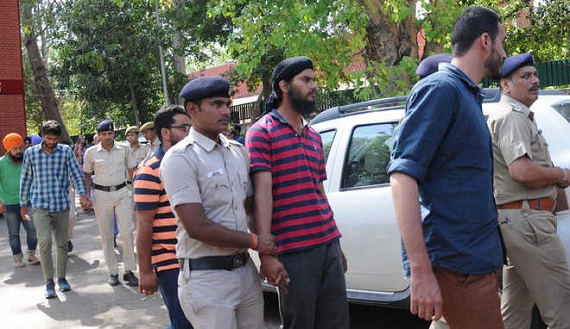 The detained students being produced in a court by the police in Chandigarh on Wednesday.

Taking cognisance of their statements, the Judge ordered the police to get 18 severely injured students medically examined by a board of doctors at the GMSH, Sector 16, and submit a report on or before April 26. He further directed them to also submit a report to the UT SSP so that an inquiry could be conducted, if required, notes The Tribune (TT).

During the hearing the Judge provocatively asked  the students to speak the truth without fear and listened to their statements carefully. One of the students, Satya Prakash, told the court that after they were arrested, the police slapped them and hit them with sticks.

Buta Singh said that caste-based remarks were passed against him as he belonged to the SC category.

“They thrashed us for two-three minutes, then stopped and then again thrashed us. This continued for around four hours,” he said.

“They dragged me outside the gurdwara by my neck and punched me 15 to 20 times… Later, they took me away in a police vehicle to the Sector 11 police station while thrashing me throughout the route… They also broke my spectacles” reads a quote from the statement given university student Meharpreet.

Furthermore, another student named Rajat claimed that he was thrashed with a belt and a stick was smashed on his feet after the arrest. Similarly after appearing before the Judge alleged that they were made to lie on the floor and smashed with sticks on the feet at the Sector 24 police post. Others alleged that they were not given painkillers at the hospital and were not medically examined properly. They also showed injuries on the hands and head. There were some others who said they were innocent and were arrested from hostels and the library and had nothing to do with the protest, said media reports.

Media sources indicates that one of the girls arrested has alleged that it was a nightmare spending the night at the police station as she was not provided sanitary napkins when she asked for these. Another girl alleged that the Chandigarh Police passed obscene remarks against her. Meanwhile, all students, who were ferried to the court in three buses, were sent to 14-day judicial remand.