Mumbai: As per the media reports coming in from Mumbai, the pro-hindutva leader Pragya Thakur here on Tuesday was granted bail by Bombay high court but co-accuse Lt Col Prashant Purohit was devoid of this relief. Notably, she was also acquitted in the Ajmer Blast case that took place on 11th October 2007 when National Investigation Agency (NIA) filed a closure report in a NIA court earlier this month (4th April), 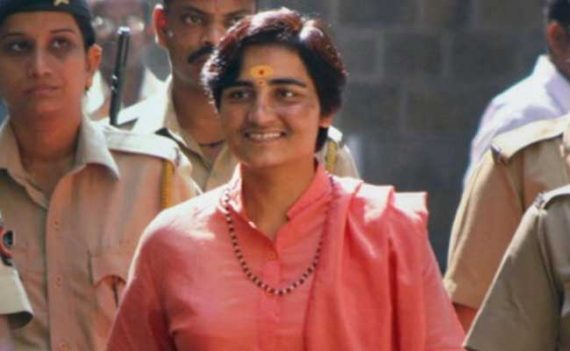 A bench of justice Ranjit More and justice Shalini Phansalkar-Joshi said the court had found “no prima facie evidence against” the hindutva leader  and asked her to deposit a cash surety of Rs 5 lakh, said media sources.

Six persons were killed in blasts close to a mosque in Maharashtra’s Malegaon on September 29, 2008. In its charge sheet filed next year, the state anti-terrorism squad named 14 people, including Pragya Thakur and Lt Col Purohit who were arrested on charges of being key conspirators, all were the members of pro-Hindutva group Abhinav Bharat reads Hindustan Times in its report.

The case was handed over to the National Investigation Agency in 2011.

The high court was hearing appeals filed by Pragya Thakur and Lt Col Purohit against an earlier order of a special court that rejected their bail pleas.

According to investigating agencies, the blast was  carried out by pro-hindutva group Abhinav Bharat and 11 persons are in jail in the case.

While pleading Pragya Thakur presented her argument said that the lower court failed to take note of the change in circumstances in her case considering that the NIA declared in its charge sheet that it found no evidence against her and charges should be dropped, said the media sources.

On the other hand the family members of the victims killed in the blast argued that there was enough evidence in the ATS’ charge sheet to establish that she was one of the main conspirators.

Categorically, NIA opposed Purohit’s bail plea and argued that there was prima facie evidence in the form of audio and video recordings, call data records and witness statements that proved his involvement in the case.

Media reports indicates as per NIA, Purohit had taken part in the conspiracy meetings and even agreed to arrange explosives.